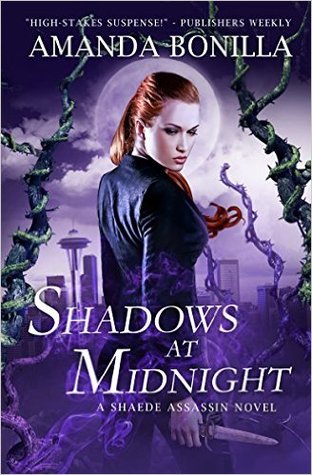 Shadows at Midnight
Author: Amanda Bonilla
Reviewer: B.
Rating: A

Though I’ve tried to keep this review as spoiler-free as possible, there were a couple of things that I would have appreciated knowing before I began reading Shadows at Midnight. What Darian goes through in the beginning of the story is torture. Long, graphically detailed torture that is also a kind of mental violation. But, as upsetting as Darian’s experience was, I think what Xander is subjected to is even more disturbing. Although I don’t care much for him, I believe it should be noted that what happens to him is nothing short of rape (being sexual, psychological, and non-consensual) and thereby merits a trigger warning.

Having said that, I found Shadows at Midnight to be challenging, exciting, persistently engaging, and difficult. From the very beginning, Darian is in a place of such darkness and pain that it was hard to read. What she suffers is neither quick, nor glossed over, but goes on for the entirety of the first three chapters. The tension-filled journey and battle that almost immediately follow take up a solid six chapters of their own. After that, the story is filled with pitfalls and second-guesses, and Darian becomes more acquainted with her worst fears than ever before. This is a heavy narrative to get through, which is part of what makes it so compelling. Still, it was so good in many ways that I just couldn’t stop reading it.

Despite the gravity of the events of the story, this is Darian at her finest. Now that she has so much to lose, she is more determined than ever to hold on to those she cares about. She is ferocious and brittle, yet loyal and unwaveringly dedicated to their respective causes. The trials that Darian has faced thus far have been exceedingly harsh at times, but she’s evolved into a wonderful character in the process. While there were moments in earlier stories when I was frustrated by her arrogance and stubborn recklessness, I’ve come to like her tremendously at this point, and in Shadows at Midnight, she’s become truly remarkable.

All of my other favorite characters are back, as well, including Tyler, Raif, Asher, Levi, the rest of Darian’s Shaede team, and even Anya. I would have liked to see more of some of them, but every moment they each spend with Darian is used to reaffirm and strengthen the bond they share. At the same time, the author manages to create an almost melancholic tenor about these scenes as Darian begins to acknowledge the divvying up of self that comes with falling in love.

Despite the captivating nature of the plotting and action in Shadows at Midnight, for me, this was the culmination of Darian and Tyler’s love story, as well. I can’t think of another series I’ve read lately that put their main couple through so much. But, the Shaede Assassin stories aren’t romances, making the romantic elements all the more appreciated. Their relationship needs to be experienced directly and from the beginning, and is definitely worth the commitment to the series as a whole.

The Shaede Assassin novels are not light and fluffy reading. On the contrary, they are dark and perilous, and filled with creatures that even the series’ immortals fear. Ms. Bonilla also isn’t kind to her characters, a fact that has never been more apparent than in Shadows at Midnight. Most of the books have put me through the wringer in some way or other, but this one absolutely broke my heart. And, while I’m somewhat familiar with the cliffhangers that seem to be requisite when it comes to Darian, nothing could have prepared me for this ending. This is an excellent addition to a series that has grown better over time, and, as much as I’m feeling the pull to reread it immediately, I’m not sure I can face it just yet—and I mean that as a sincere compliment. Regardless, waiting for the next story will be both wonderful and horrible, and I’ll be greedily prowling the internet for any hint of its progress until then.

Has Darian’s past finally caught up with her?

The Rakshasa queen, Padma, has a score to settle–she wants those responsible for her son’s death to pay and to pay dearly. Darian, Tyler and Xander are all at risk–and Padma’s powers could force them to live the rest of their lives in the madness of the Realm of Illusions…

While Darian is taken and is the first to suffer, she’s soon rescued by Tyler, the one man to never disappoint. But what Darian doesn’t know is that her freedom comes at a steep price–Xander’s the King of Shaedes, imprisonment. Darian knows what horrors await in Padma’s dungeon. A rescue mission won’t be easy and she can’t do it alone.

Deep in the bowels of Goblin Valley, Darian, Tyler, and her small band of Shaede warriors fight their way through a dark labyrinth. In a realm where illusions rule, with danger at every turn, the odds are stacked against them. Time isn’t on their side, every second spent in Padma’s custody will be another step Xander takes toward madness. A kingdom can’t be ruled without its king and the wolves are at the door, waiting. If Darian can’t get to Xander before he succumbs to the illusions, an entire kingdom’s future is at stake…

5 responses to “Review: Shadows at Midnight by Amanda Bonilla”