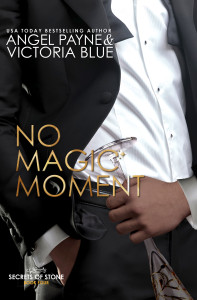 As I settled into a small booth in the back of the restaurant, my cell vibrated. The name in the window drilled my jaw with tension.

For another two seconds, I wavered my thumb over the green button. Why I even considered the red one was a mystery. Fruitless cause, man. The man didn’t carve time out of his Saturday night, especially at this hour, to ring up a buddy to shoot the shit. Whether he called on his own or at Margaux’s request, I wasn’t going to get out of this.

The green button it was. Dammit.

“To what do I owe this pleasure?”

Killian chuckled. “You serious about that?”

I lifted a smile at the waitress as she brought my coffee. Dropped it as soon as she left. “I was hoping to be.”

His heavy exhalation filled the line. “Claire and I were in bed. She was looking for a new book to read but a swarm of celeb gossip alerts blew up her feed. You know what they say about the vultures.”

“Yeah.” I’d learned the back end of that one during my first week in corporate PR clean-up. “Can’t dodge their shit if you don’t know where they’re circling.”

I blew on my coffee, instantly recognizing the action as habit rather than practicality. No way would I be dumping the shit into the acid pond of my gut now. “So it’s the Michael Pearson feeding frenzy for San Diego’s rag sites tonight?”

“San Diego?” he countered. “Dude, your little fireworks show at the Del has already been picked up by the national feeds. I think TMZ’s leading with you tomorrow.”

I raked a hand through my hair. “Wonderful.”

“That’s one way of putting it.”

“As long as I’m prettier than Kanye, right?”

“Oh, you’re pretty, all right. Must be that combination of model perfection and animal rage. Last time I checked, a few thousand women were posting about how to get into your pants.”

“Access to my pants is controlled by one hell of a gate keeper, man.”

Killian’s pause was significant. “So Margaux’s still speaking to you?”

“Define ‘speaking.’” Sharing details beyond the initial drama in the ballroom with Dec seemed a bad decision right now.

“Damn. Claire was afraid of that. Honestly, so was I.”

“It’s fine,” I insisted. “We’re fine. We just need some space before we…talk some things through.” When he threw back nothing but a snicker, I growled, “What?”

“Space? In order to ‘talk things through,’ huh?”

I grimaced. “What the hell is wrong with that? You’ve never had anything to talk through with Claire?”

Another long pause. Too long.

Finally, Kil’s snort filled the line. “You’re not even at home, are you? Did you run off to a bar? Isn’t going to help, my friend.”

“Says the guy who ran off and played grunge Jesus for six months?”

“And almost lost the love of my life because of it,” he asserted. “Pearson, learn a valuable lesson from my mistake. Go home and do your penance on the couch for a few nights. Then she’ll be ready to talk to you. Drinking yourself into a stupor just puts off the inevitable.” He pushed out another telling breath. “By the way, Andre’s driving, right?”

“I’m not drinking, goddammit.” Not even the coffee, which smelled pretty damn good. “I’m just—”

“Not at home. Which is where you should be.”

The waitress plunked down my bear claw. I stabbed a fork into the pastry and twisted hard, resigned to mutilating the thing instead of eating it. “There’s nothing wrong with giving this some space.”

As I spoke, rough rustlings crackled over the line. Only it wasn’t Killian I heard next.

“Are you out of your damn mind?”

Claire’s huffy bark would’ve made me laugh—except that she scared me in this state of rage. I held the phone back for a second, wondering when the raging bees would burst from it.

They didn’t. But maybe honey was a good idea, anyway. “Heeyy, Claire-Bear—”

“Do not with the ‘Claire-Bear’.” More scratches on the line. When she spoke again, her voice was louder. “Why the hell are you out carousing, when—”

“That’s not the point. You’re out, Michael Pearson. Do you know what that’s doing to my best friend—the woman you claim to love?”

“Claim to love?” You mean the woman I just proposed marriage to—who, incidentally, turned me down?

“Don’t piss defensive on me,” she snapped, “when you repeatedly threatened to knock Killian’s ass into the next century when he disappeared on me last year.”

“What?” Killian punched it out from the background. “He did?”

“You think Margaux knows that? Margaux, who has deeper issues than I ever had about feeling accepted, acknowledged, loved? Margaux, who’s been treated like a disposable toy by everyone in her life—who thinks maybe, for the first time, she’s found a person who won’t throw her away, even when times get rough?” She punched out a girl growl. “What the hell are you doing with that trust now, Pearson? Moping in some dark corner somewhere about how ‘complicated’ your soul is, about how she ‘won’t get it’? Opening all that baggage again, whatever the hell it is, and crying over the dirty underwear inside?”

I took a gulp of the coffee. If it rained acid on my stomach lining, so be it. Maybe I deserved the agony. “I’m not—”

“Save it.” Both words were seething switchblades. “Stop sulking over your dirt and clean it up, Michael. Deal with it. You have a remarkable, beautiful, brave woman who wants to help you do just that. Get your ass back to her—and refuse to give up until you make it right!”

So. Silences really could be deafening. She’d gone so quiet, I wondered if the connection had been lost—until hearing Killian clear his throat in the background, communicating one clear message. Claire had just wowed the pants off her husband—if he was still wearing any. Better odds lay on him not—in which case, I guessed at how he craved to wow her in return.

“I only get this pissed if the cause is worth fighting for.”

A smile started in my heart and brimmed on my lips. “I know, Claire-Bear. I know.”