Today I welcome the authors of the Dark Pursuit Anthology. They are each here today to share with readers a bit about her contribution to the anthology and tell us what is her favorite snippet or line for her story.  Please help me welcome Jessica Jarman, Bronwyn Green, Paige Prince, and Kris Norris…

Blurb: Months ago, Tara Wilcox ran away from Luca Castell and Oliver Gordon. She’d fallen hard for the pair of hunters and feared their growing feelings for her. But what truly terrified her was the possibility that they’d discover what she really is. That she’s the very thing they hunted.

Luca and Oliver are partners, in every sense of the word, and their lives are spent running toward danger. Falling for Tara was the biggest risk they’d ever taken, and her vanishing without a word gutted them.

But, she’s back, desperate for their help in hunting a vicious para creature. Despite the risks—to their lives and their hearts—reigniting the love they’d had is simple. But nothing is simple when, faced with an impossible choice, Tara reveals her true nature.

Now that Luca and Oliver know the truth, Tara has another choice to make—run again or trust that their love is strong enough to look beyond the monster she fears they’ll see.

“I would, you know?” Oliver said, lips tickling the sensitive skin of Luca’s neck.

“I would hold on to any shred of hope I could if it were you. If you were taken away from me.” He kissed Luca’s pulse. “And I would hold on until I saw with my own eyes that I shouldn’t anymore.”

“I know,” Luca murmured. “I’d do the same. For you.” He squeezed his eyes shut then added quietly, “And for her.”

Bio: Jessica Jarman is an author, blogger and rather obsessive fangirl. Having grown up in Upper Michigan and currently living in Minnesota, she’s a Midwestern girl through and through. And wouldn’t have it any other way.

When Jessica’s not working to get words on the page, she passes the time with her amazing husband and four children, attempting to be crafty (and failing miserably), squeeing uncontrollably over my favorite shows or curling up with a good book.

Blurb: Vampire hunter, Harper Yovanoff, is not happy. Ever since her former partner vanished, she’d been content to work alone. Unfortunately, her boss doesn’t feel the same way. Harper’s been assigned a new partner—a new partner who’s an utter pain in her ass. Elliot Zielin is panty-meltingly gorgeous, but he’s also reckless, not to mention, insufferably arrogant. If he’s not careful, the vampires will be the least of his worries.

Elliot knows he should play nice with his new partner, but he can’t resist poking the bear—the tiny, angry bear who’s so freaking beautiful, she makes him ache for things he shouldn’t want. Despite the fact that Harper has a stake with his name on it, he keeps pushing.

When a powerful vampire begins actively stalking and turning hunters, Harper and Elliot are forced to work more closely together than ever in an effort to save their own. With tempers and adrenaline high, letting off a little steam goes way too far, and they both end up in a place they never expected. The threat against them increases and fighting their growing feelings for one another becomes impossible. But if they can’t stop the sire hell-bent on their destruction, all the love in the world won’t save them from becoming the very thing they hunt.

“Getting tired, princess?”
Her eyes narrowed further. “Go f*ck yourself.”

Holding her gaze, he deliberately let his eyes slide up and down her body as his hand drifted down across the front of his sweatpants. “Oh yeah. I’ll definitely be doing that—just as soon as we’re done. You can stick around and watch if you want.”

Elliot recognized the exact moment her rigidly held restraint snapped. Something that sounded like a growl escaped her throat, and she launched herself at him, tucking herself into a ball at nearly the last minute and plowing into his shins and taking him to the floor.

Bio: Bronwyn Green is an author, blogger and compulsive crafter. She lives Michigan with her husband, two children and three somewhat psychotic cats. When not frantically writing, she can be found helping in her youngest son’s classroom or binge-watching Netflix while working on her latest craft project. 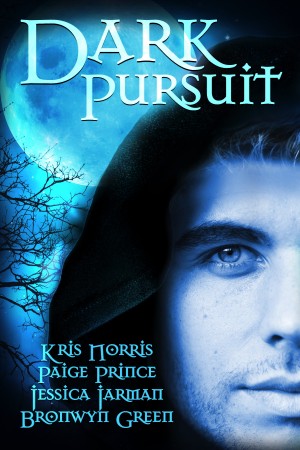 Blurb: Born a witch, Sarah, the daughter of the town’s only judge, keeps her gift and her love of William, a lowly farmhand a closely guarded secret. Their plans for a life together come to a grisly end when Bastian, one of the world’s most feared and evil vampires, finds out about her power and decides to add another prize to his collection.

A hundred years later, William has been reborn as Lucas Dagan, the most powerful vampire hunter the Order of St. Marcellus has in its ranks. He has no memory of his past with Sarah. But, Sarah, now known as Caitlin, remembers. Worse, she’s now the very thing Lucas has sworn to exterminate from the earth. Any chance they might have had at happiness has been crushed.

But Bastian has returned with far more sinister plans. Duty and passion collide when Caitlin and Lucas are forced to fight together to save the world. But will determination and remembered love be enough? Because if Bastian has his way, there won’t be a Next Lifetime for anyone.

He wished for a slice of pie as he discreetly checked out her cleavage again, then mentally kicked himself in the ass. She was a vampire, for f*ck’s sake. By definition, they were mortal—or immortal, as it were—enemies.

“If you’re done ogling my breasts,” she smirked when Luke averted his eyes as though his irises had been burned, “We can be on our way.”

Bio: Author Paige Prince has been writing since she was 7 years old when she first picked up a pen to write out her fantasy of being Joe McIntyre’s girlfriend (she was 7, cut her some slack). Since then, she’s discovered that there are more fun things to write about than just holding hands and going to the movies.

Paige hails from a small suburb of Houston, Texas. She’s married to the man of her dreams and they have one beautiful little girl who is the light of their lives, two very lazy dachshunds, and one adventurous cat.

Blurb: Not all souls go quietly.

After the brutal murder of his girlfriend thrusts Daniel Cartwright into the world of the supernatural, he’s finally adjusted to the reality that monsters are real. And not all souls cross over on their own. He’d thought banishing her spirit would bring him peace—allow him to move on. That is until her ghost returns—angrier than ever and hell bent on finally completing her mission. She wants Daniel to join her…and she’s not taking no for an answer.

Arrynn Baker has spent the past two years watching Daniel flourish into one of Threshold’s best hunters. Decisive, highly skilled—she’s proud to be his partner. There’s just one small issue… She’s fallen for the man. Hard. While she’s not opposed to taking him as a lover, she’s not convinced he feels the same—not with the distance he seems to maintain. The emotional walls he never steps beyond. Besides, mixing business with pleasure rarely ends well.

When a grisly new killing rocks both their worlds, lines get crossed, and Daniel knows he’s got a choice to make. Either be content with one night with Arrynn, or man up and jump in. But if he wants a future with the woman of his dreams, he needs to deal with his past, once and for all. Even if the solution takes grave measures.

Tanner hooked Daniel’s arm as he moved past him. “At least we don’t waste our time chasing a f*cking mist. Your unit’s a joke.”

Daniel yanked his arm away, drawing himself up, when boots clicked on the floor behind him. He turned as Arrynn sauntered to a halt, auburn hair bouncing behind her in a ponytail, amused smile tilting her lips.

She hitched out a hip, giving the men the once over. “Ah, what’s wrong, Tanner? You boys get caught with your pants down, again? Feeling a bit inadequate now?”

Tanner muttered under his breath, openly gawking at her. “At least we get to drop ours, honey. From what I’ve heard, yours hasn’t seen any action in years.”