Hi, and welcome to the DEAD RINGER release tour! We’re Heidi Belleau and Sam Schooler, here with more DEAD RINGER B-roll footage and DVD extras than you can shake a stick at. Stay tuned for author commentary, posters and info about all of James Ringer’s movies, classic Hollywood factoids, and, of course, some sweet prizes!

As part of our tour, we’re sharing the beautiful set of five movie posters that the amazingly talented Vivian Ng designed for us! We both love commissioning art for our books, and we knew that Vivian, who designed Heidi’s REAR ENTRANCE VIDEO series covers, had a style that was perfect for what we wanted.

James Ringer is an enormous presence throughout DEAD RINGER, and we wanted to do our part to commemorate his—as Percy would describe it—“completely brilliant” filmography. So we asked Vivian to design a poster for each of James’s five movies, and wrote a synopsis for each one, too!

We’re featuring all five movies in chronological order, one per post, so be sure to follow along with the rest of our tour to see the rest of the James Ringer filmography! And, as one of our tour grand prizes, you can win a postcard set of the five posters—be sure to leave a comment below! 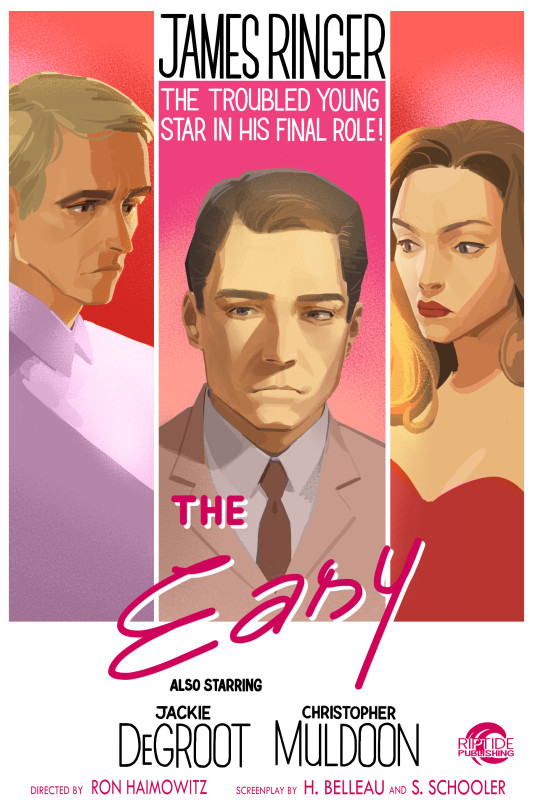 Soft-shelled Blake Lawrence (Ringer) isn’t keeping up with the times. In a town full of folks willing to show any curious man that looking in the wrong place will get him a knife in his gut, he’s got too many morals to make it as a private eye . . . and his boss knows that. After he loses his job, he stumbles on the case of a lifetime—a young woman (Jackie DeGroot) squirreled out of her family fortune by her dastardly uncle (Christopher Muldoon). The girl is desperate to reclaim her father’s money . . . and her mother’s priceless jewels.

There’s a big payday in it for Lawrence if he can track down the missing riches. But when getting them back means committing the ultimate sin, will he have the guts to find his glory?

Thanks to our generous blog hosts, and thanks to you for hanging out with us! Be sure to check out our full list of tour stops so you can see the rest of our extras and snag yourself more chances to win our giveaway!

Brandon Ringer, the look-alike grandson of an enigmatic Hollywood icon who died too soon, has a lot to figure out for a nineteen-year-old. Broke and alone, he’s determined to hold on to his beloved, recently deceased grandmother’s house, even if he has no means of doing so. Still, having the face of one of the most notorious actors in cinematic history has got to be worth at least that much, even if he’s hated the man his entire life.

Resigned to his sterile existence in a well-appointed corner of his parents’ extravagant home, Percy Charles only has one real passion: misunderstood god of the silver screen, James Ringer. Despite knowing everything about the man, he needs to be even closer, and hiring an escort who looks like him for what could amount to a few hours of mutual idol worship and movies just might be the perfect escape.

While attempting to distill over two pages of notes, more bookmarks than I was willing to count, and far too many discarded beginnings into an adequate review, I realized that I had no real idea where to start. On the surface, Dead Ringer is a story of forgiveness, redemption, and love (except that it isn’t that tidy). Neither is it a polite journey of self-discovery, although there is a substantially rougher version of that running throughout the narrative as well. Regardless, I think it’s one of those rare stories that might affect everyone a little bit differently, and really should be experienced firsthand.

The two main characters, Brandon Ringer and Percy Charles, have spent their respective lives to date within the confines of how others define them. Brandon has been involuntarily carrying the weight of his grandfather’s supposed sins for as long as he can remember, and nurturing an unhealthy sense of self-loathing in the process. Similarly, the extra care Percy’s disabilities require has left him at the mercy of his neglectful parents and a sinister caretaker. While their situations are different, the resulting pain is comparable.

Another thing that I appreciated about this story was that there weren’t any meaningless characters in Dead Ringer. Good or bad, each one plays a significant role in Brandon and Percy’s evolution. As much as I loved them both, most of the secondary characters were just as vivid, Ms. Monroe and Kovie, in particular. Even the ghost of James continually ripples across the surface of the narrative, changing shape over and over again as Brandon becomes more complete with his presence, while Percy does the same without it.

One more important topic that Dead Ringer addresses is the humanizing of those who work in the sex industry. Both Ms. Monroe and Brandon take pride in what they do, despite Brandon’s earlier attitude. With one particular exception, Brandon enjoys those he works with and discovers that being hurt and degraded simply isn’t part of his job. Neither is being a target for another’s hate. These things are not okay, and the authors prove highly adept at illustrating that the right to exist with self-respect and dignity should never be a vocationally dependent concept. On the other hand, Percy’s enthusiastic acceptance of their situation was welcome as well as sweet.

Overall, I enjoyed Dead Ringer tremendously and found it to be both clever and warm. While it isn’t a lighthearted story, I thought it was filled with ideas and emotions that are important and merit more attention. Brandon and Percy are both exasperating and completely lovable, and I already care about them a great deal. With several particularly rough scenes, this was certainly not an easy read, and yet I was able to see the world from their perspective with an almost painful clarity because of it. I guess my favorite thing about Dead Ringer is that it made me think about some things in a way I hadn’t before. I’m looking forward to reading it again. 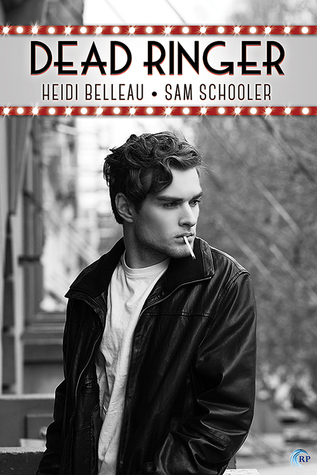 Brandon Ringer has a dead man’s face. His grandfather, silver-screen heartthrob James Ringer, died tragically at twenty-one, and Brandon looks exactly like him. But that’s where the resemblance ends. Brandon is unknown, unemployed, and up to his ears in bills after inheriting his grandparents’ Hollywood mansion. He refuses to sell it—it’s his last connection to his grandmother—so to raise the cash he needs, he joins a celebrity look-alike escort agency.

Percy Charles is chronically ill, isolated, and lonely. His only company is his meddlesome caregiver and his collection of James Ringer memorabilia. When he finds “Jim Ringer” on Hollywood Doubles’ website, he books an appointment, hoping to meet someone who shares his passion for his idol.

Brandon? Not that person.

But despite their differences, they connect, and Percy’s fanboy love for James shows Brandon a side of his grandfather he never knew. Soon they want time together off the clock, but Percy is losing his battle for independence, and Brandon feels trapped in James’s long shadow. Their struggle to love each other is the stuff of classic Hollywood. Too bad Brandon knows how those stories end.

Heidi Belleau was born and raised in small town New Brunswick, Canada. She now lives in the rugged oil-patch frontier of Northern BC with her husband, an Irish ex-pat whose long work hours in the trades leave her plenty of quiet time to write.

Sam Schooler is queer and nonbinary, and she grew up surrounded by corn, churches, and cliché “Hell Is Real” signs. After twelve years of Catholic school in southwestern Ohio, she applied to the most liberal university she could find and wound up with a degree in journalism. Now, she writes trope-subverting new adult books about people of all genders and orientations—and all the ways they can love each other. Sam lives with her wife and their two cats in Regina, Saskatchewan.

You can find her backlist and details about upcoming projects at samschooler.com.

If you’re feeling daring, follow her on Twitter as @samschoolering or on Tumblr as meetcute-s to get the full immersive experience.

Feeling lucky? Leave a comment with your email on this or any of our other DEAD RINGER tour posts for a chance to win one of our two grand prizes. Each winner will receive a $15 gift card to Riptide Publishing, plus get their choice of either a poster-sized print of DEAD RINGER’s gorgeous cover photo by Marisha Dudek, or a postcard set featuring the eye-catching ephemera of James Ringer’s filmography, designed by Vivian Ng. Contest ends October 31, 2015 and is not restricted to U.S. entries. This contest is sponsored by the authors and/or publisher. This blog, nor its owner or reviews, is responsible for the contest rules, winner selection, or distribution of prizes.