Welcome to the Riptide Publishing/L. A. Witt blog tour for Rain Shadow, the latest installment in the multi-author Bluewater Bay series! 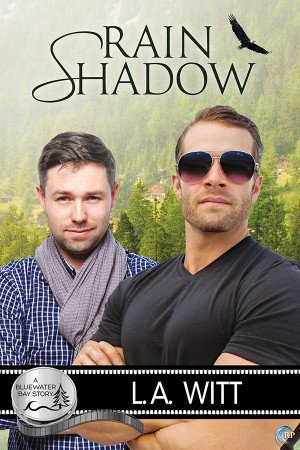 Divorced, bitter, and lonely in self-imposed exile in Bluewater Bay, Jeremy Rose has a lot on his mind. His job as bodyguard has become increasingly stressful, his client’s unraveling relationship with her girlfriend is a constant reminder of his own failed marriage, and he thinks his kids hate him. Finding a gorgeous man in his age group who is also averse to anything beyond a casual hookup or two is more than he dared hope for. But, that’s exactly what counselor Scott Fletcher is offering—which suits Jeremy just fine. After all, surely the very last thing he needs now is to fall in love. Right?

Rain Shadow is the story of Jeremy Rose, a (fairly) recently divorced father of two teenagers who is the current bodyguard for the director of “Wolf’s Landing,” the fictional television series filming in Bluewater Bay. One of the better “late bloomer” stories I’ve read, it explores the painful difficulties Jeremy must face after he realizes, and stops denying that, he’s gay. Telling himself that being alone is what’s best for his children, who still live with their mother in LA, he has explored his sexuality through one-night stands and brief hookups, never letting anyone get too close.

Scott Fletcher, a Marriage and Family counselor, is also determinedly single, having lost the man he loved many years before in a tragic accidental shooting. Since his partner was a policeman who was killed in the line of duty, Scott has sworn off dating men with dangerous jobs, thereby making Jeremy’s vocation a deal breaker. Their situation would be perfect if they weren’t lying to themselves about how much they’ve come to need one another.

L.A. Witt is a familiar author to me by now, and I can’t think of anything she’s written that I haven’t liked. Rain Shadow is no exception. She addresses Jeremy and Scott’s situation without unintentional awkwardness or resorting to the use of cartoonishly earnest protagonists. Issues of denial, honesty, love in its many forms, and even the fact that sex still happens after the age of twenty-eight are all addressed with an understated frankness that made becoming invested in this story very easy to do. Scott and Jeremy’s tale can absolutely be taken as a statement, but not a sermon. And I thought it worked extremely well.

That’s not to say that Rain Shadow is without drama. It has plenty, all of it the wince inducing, close call variety that makes for interesting, but not easy, romance. Jeremy’s denial over the realities of his problems with his kids, and his unwillingness to acknowledge that he might be wrong continued to escalate throughout the story. Every time I readied myself for the confrontation that would clearly be necessary in order for any kind of resolution to begin, only to find it was somehow defused, my anxiety grew. When things really did start falling to pieces, I was exhausted. Which I loved in the masochistic way of many ardent readers.

The Bluewater Bay series has been a favorite of mine for some time now, its authors addressing a refreshingly diverse range of topics and personalities with straightforward, openhearted creativity that is both important and unique. Rain Shadow continues that tradition beautifully. Scott and Jeremy’s connection was both tender and undeniably provocative, as well as being easy to believe. The return of some of my favorite characters from other stories in the series certainly didn’t hurt, and I was extremely glad to see them again. While Rain Shadow can be read as a standalone without any trouble, I highly recommend reading the entire series, if possible. These really are wonderful stories, and I know that my own appreciation for the denizens of Bluewater Bay continue to grow with each one.

Jeremy Rose came to Bluewater Bay to work as Anna Maxwell’s bodyguard, not to escape his increasingly bitter relationship with his estranged kids. He just wants to focus on his job and be alone for a while. He’s done with love, especially now that three years after his long overdue divorce, he’s got a front-row seat to the rapid deterioration between Anna and her girlfriend. Cynical doesn’t even begin to describe him.

Except Jeremy refuses to seek counseling for his broken family, and Scott refuses to get seriously involved with men who work dangerous jobs. They both need to realize they can only hide for so long from the pain they came here to escape. They must face their pasts before they lose their shot at a happy future.

Every comment on this blog tour enters you in a drawing for a choice of two eBooks off my backlist (excluding Rain Shadow) and a $10 Riptide Publishing store credit. Entries close at midnight, Eastern time, on October 24th, and winners will be announced on October 26th.  Contest is NOT restricted to U.S. entries. Contest sponsored by author/publisher. This blog and its reviewers are not responsible for prizes.