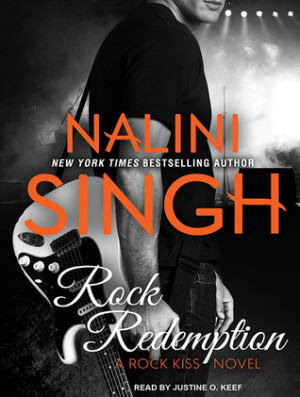 The Rock Kiss series has become a guilty pleasure for me.  I’m not much for contemporary romance, but this series by Nalini Singh has just captivated me.  I love the characters and the inner struggles they need to overcome, as well as the external circumstances.  It is just a compelling series and no matter how hopeless it seems, ultimately love wins in the end.

Since Noah and Kit were first introduced, I’ve been waiting for their story.  I’ve wondered what demons Noah fights and how he could ever mend what he willfully destroyed so brutally. Noah is truly traumatized.  I do appreciate that his wounds are not trivialized.  There is a lot of time taken and, though we have our happily ever after, Noah still has a long road ahead of him. Thankfully, he isn’t alone on that road, not with Kit supporting him along the way.

This isn’t just a story of redemption for Noah; Kit undergoes some staggering self-examination and growth as well.  She makes the choice, and not lightly, to forgive Noah and learn to trust him again. Considering how many people have failed her in the past, her choosing Noah is not done lightly, and it is painfully agonizing as she tries to heal and move forward.

The on-going issue of Kit’s stalker is finally explained and resolved in Rock Redemption even though it was a bit on the backburner, with the story of Kit and Noah taking center stage.  However, I found it interesting and a great twist at the end regarding the stalker storyline.  I was surprised by how long it took for it to be figured out, even though the identity of the person is surprising and something I was unable to figure out.  Though this storyline supports and aids in the Kit and Noah storyline, it was the weaker part of the novel.

This was my first time listening to Justine O’Keef’s narration.  I enjoyed her performance, though some of the male voices seemed to blend together.  Her voice was fresh and I liked how she portrayed the voices of the women in the series.  However there were several spots where it appeared sections were rerecorded.  In a couple, it seemed that the recording may have taken place in a different location – the sound of it (the background feel of the narration) was different.  It interrupted the flow of the story – almost felt as if someone else started to narrate. I do not know why this occurred, but I wish they had begun rerecording at the beginning of a chapter or scene change so it was less jarring.

For someone that was itching to get Kit and Noah’s story, I was not disappointed.  Though my heart broke over the anguish and heartache that occurs, it only makes the connection between them stronger.  It is obvious that Abe’s story is next and I can’t wait to see what happens to him.  I don’t know if Abe’s book will be the last, but either way, the Rock Kiss series is a passionately romantic and compelling series.  Well done Ms. Singh!

Kit Devigny could have loved rock guitarist Noah St. John. Their friendship burned with the promise of intense passion and searing tenderness until the night Noah deliberately shattered her heart. Noah knows that he destroyed something precious the night he chose to betray Kit, but he’d rather she hate him than learn his darkest secret. All he has left is his music. It’s his saving grace, but it doesn’t silence the voices that keep him up at night. When a media error sees Noah and Kit dubbed the new “it” couple, Kit discovers that her chance at the role of a lifetime hinges on riding the media wave. Wanting-needing-to give Kit this, Noah agrees to play the adoring boyfriend. Only the illusion is suddenly too real, too painful, too beautiful . . . and it may be too late for the redemption of Noah St. John.