Posted October 26, 2015 by B. in Paranormal Romance, Rating B, Reviews Tags: Bs-review, Heart of the Wolf series, Sourcebooks, Terry Spear 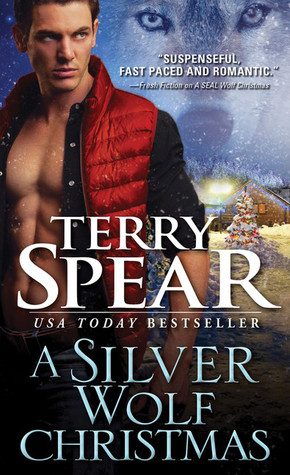 Laurel MacTire never considered joining a large wolf pack with her two sisters until moving to Silver Town under the pretense of renovating the derelict hotel there. But, with a shortage of female wolves in the pack, the entire town had gone out of their way to convince she and her sisters to stay—one frustratingly intriguing male wolf, in particular. It would be the perfect place to settle down, if only they didn’t suspect that at least one the town’s residents might have been involved in the disappearance of their beloved aunt fifty years ago.

Although he would like to get closer to the independent, beautiful she-wolf who has occupied his thoughts so often since moving to town, CJ Silver can’t shake the idea that the MacTire sisters aren’t all that they appear to be. Still, if finding out what they’re up to means getting to know Laurel better he certainly isn’t going to complain. But, it seems like nothing is simple when it comes to solving one of the biggest mysteries that Silver Town has ever seen, and figuring it out will take the help and support of everyone in the pack.

In A Silver Wolf Christmas, Ms. Spear takes us back to Silver Town, Colorado, where things are definitely not what they seem. This time, the Silver pack must deal with not only betrayal and a possible murder, but ghosts and obnoxious ghost busters, too. Of course, it wouldn’t be a Heart of the Wolf tale without sexy wolf shifters and plenty of romance, and this story has lots of both.

I thought that Laurel and CJ made an excellent team in every way. As the story takes place about six months into their acquaintance, the speedy courtship that Ms. Spears’ wolves usually engage in felt more solid than it might have had Laurel and CJ just met. Both wolves are headstrong, yet cautious, and the respect they have for each other’s strengths and abilities is evident as soon as they join forces to uncover the truth. Laurel’s determination to find answers, and CJ’s equally resolute desire to win her over made it easy to accept that they truly are a good fit. Of course, once their romance begins in earnest, there was absolutely no doubt about it.

Some of the most enjoyable parts of the Heart of the Wolf stories are the mysteries that drive them. A Silver Wolf Christmas has even more going on than usual, not only in the form of tension within the Silver pack itself, but also from outsiders looking to cause trouble. Additionally, there is the problem of Laurel’s missing aunt, as well as the hotel’s resident ghost, who makes an appearance just in time for the grand opening. All things considered, it’s a wonder the pack was able to pull everything off as well as they did.

While I enjoyed this story a great deal overall, there were one or two things that I had some difficulties with. The whodunit aspect of the story was wonderful, but there was an almost impersonal feel to the way any remaining loose ends were gathered up and explained away in a single conversation, along with a concise recap of the story. These moments were few, however, the majority of the narrative being filled with quite a few twists and turns, leaving the rest of the way clear for a well-deserved happy ending.

The only other thing that might be frustrating for readers new to the series is that the cast of characters is sprawling, and a little difficult to follow sometimes. There are multiple sibling groups, plenty of cousins, members of separate packs, other honorable mentions, and even more whom we only know through the memories of the current characters. Although it’s a lot to keep track of, the story stands on its own extremely well. Fortunately, many of these have had their own stories, or featured prominently in others, so I was able to at least recognize most of them, even if my memory became a little fuzzy on all the details after a while.

Once again Ms. Spear has written a fun, sweet shifter romance with an engaging mystery that kept me engrossed throughout the novel. A Silver Wolf Christmas was lighthearted in all the right places, and the author’s ability to create detailed scenes made imagining the wolves in their environment easy to do. Laurel and CJ’s affection for each other was also a treat, and I felt that they were two of the better-matched couples of the series I’ve had the pleasure of reading so far. While these stories all stand on their own, I highly recommend catching up on as many of the previous titles as possible, both because the number of characters has grown so, as well as the fact that they’re just a lot of fun to read. In the end, this series is still a keeper, and one I hope to see more of very soon.

C.J. Silver is eager to help the new she-wolves in town renovate the old hotel in time for the holidays, especially if it means spending time under the mistletoe with the alluring Laurel MacTire.

The bustle in the long abandoned hotel attracts the attention of human ghosthunters out to prove the place haunted, but the bigger problem is keeping them from discovering the werewolves in Silver Town. CJ and Laurel have to pull the wool over everyone’s eyes. Working together is a surprisingly hot holiday treat for two attractive and clever wolf shifters.

Purchase Info:
A Silver Wolf Christmas (Heart of the Wolf #17)

Want a chance to win A Silver Wolf Christmas? Sourcebook is giving away this book and other Christmas titles for a limited time HERE.

6 responses to “Review: A Silver Wolf Christmas by Terry Spear”