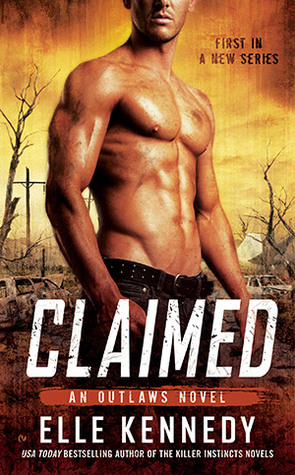 *wipes drool from chin* You. Guys. I have absolutely NO idea how to coherently explain how IN LOVE I am will Claimed, Elle Kennedy’s first title in her Outlaw series. First, I want to clearly state—for the record—I am in a book coma. I also stayed up WAAAYYY too late reading last night because of this title. Also, don’t let my genre category-thing below mislead you: Claimed is post-apocalyptic/dystopian/erotic romance. Apparently, retailers don’t have that category. THEY SHOULD. I’d be all over it. Of course, future titles in this category have a pretty high bar to meet, as I’d make Ms. Kennedy’s venture into this genre the standard.

Five super hot and sexy guys. One spit-fire blonde. Making their way in a future so different from our reality. The world-building is fabulous. I had images of a war-ravaged world in my head throughout the book. It’s almost like The Walking Dead meets The Stand without all the gore. I liked watching the relationships between the characters evolve. Just when I thought I would be able to put down my Kindle and do the dishes or flip laundry, something else would be revealed—and I’d keep reading instead of doing other stuff. My inner narrative as I read, if I had to put it in a sentence, would be: Oohhh… I wonder how THIS is going to work out… Each new reveal in the world-building or in character development drew me in further. At about the 55% mark, I went to my auto-buy list (because I may be guilty of having that note on my phone…) and added this series. I don’t usually do that until I hit the end and decide whether I like the resolution and forward-movement into the next book of the series.

If you’re not into menage, you might want to pass… but it’s not super in-your-face, and it IS Super. Hot. *fans self* There’s a Dominant/submissive vibe going on, and I encourage everyone that gets into these subgenres to get all grabby-hands for this title. Rylan is our third in the menage scenes, and I have a bit of a crush on him. He’s funny, and he clearly knows his role in the relationship. Being Connor’s bestie (our hero!), he’s learned to read his friend like a book. They live together, fight together, and have come together to survive in this world they grew up in. Rylan’s humor makes him endearing, and we clearly are catching glimpses of many parts of him to set up his future title (next, please!).

Hudson, our leading lady, comes from a privileged background. She’s no shirking flower, however. Living inside the city walls made her naïve but not helpless, and watching her growth throughout the story was breathtaking. I especially liked a couple of her character elements in the last third of the book. She discovered her submissive side early on, but O.M.Gee!!! Amazing.

Connor. Um. Wow. Tortured alpha much? You know how sometimes you’ll pick up a book and there’ll be an alpha hero that’s so… alpha-y… you go back and forth as to whether you like him or not? Well, that didn’t happen with Connor. I immediately liked him. I wasn’t sure how things were going to play out with him and Hudson, especially with Connor’s kink being at the forefront of who he is, but I’d have to say it worked out deliciously.

Overall, if you’re looking for your next book coma, and you’re into dystopian/post-apocalyptic/erotic romance/menage, pick up Claimed, the first title in Elle Kennedy’s Outlaws series. Let me know if you loved it as much as I did!

After a devastating war decimated most of the world, Hudson Lane has only known the oppressive life under her own father’s tyranny. She finally escapes, branding herself an outlaw and hunted by the Enforcers. Her best chance at survival is Connor Mackenzie, an aggressively sensual fugitive who opens her eyes to the wicked possibilities of a world without rules.

As the leader of a band of outlaw fighters, Connor can’t resist the beautiful stranger who asks for his protection. Despite his reservations, he agrees to introduce her to a whole new way of life. But when Connor discovers Hudson’s connection to the enemies of liberty, he wonders how far he can trust the woman who has abandoned all inhibitions to challenge every forbidden desire.