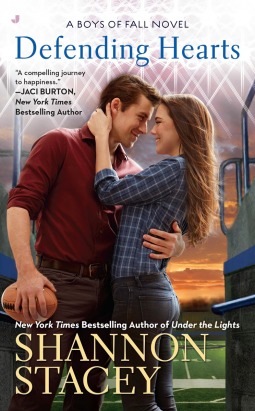 Alex Murphy is a photojournalist who finds himself burned out after a teenager’s cellphone picture went viral instead of his professional shots. He’s restless and needs a place to start over, so he decides to head back to his home town, Stewart Mills, to chronicle the efforts to save the high school football team and get the town’s economy moving again. Not planning to stay long, he rents a room from Gretchen Walker, a former classmate.

Gretchen Walker is a farm girl, homebody who helps take care of her grandmother and works the farm she grew up on. Unfortunately, they are struggling to make ends meet, especially after adopting a chocolate lab named Cocoa, so Gretchen agrees to bring in Alex Murphy as a border. His not-quite-a-friend-not-quite-a-stranger.relationship is something Gretchen thinks she will be able to tolerate in a tenant, until things heat up between the pair.

After enjoying, but not loving Under the Lights, the first book in the Boys of Fall series, I was pleasantly pleased with the romance and events in Defending Hearts. This second offering finds a better balance between the romance and the condition of the town than the first book. The focus of the story is on the couple and their relationship, with the financial difficulties and plight of the town as the setting rather than the driver of the plot. And yes, there were a few moments reminiscent of Ms. Stacey’s Kowalski series, but overall the book and series stand separate as a small town under hard times romances rather than mostly light and fluffy. This balance afforded me the opportunity to create a strong emotional connection to the characters, which made for a wonderful read.

I absolutely adored Gretchen and Alex. Individually, they are both strong, ethical people who enjoy their lives and jobs but find something lacking. Right from the start the pair has wonderful chemistry, and never has opening a jar of pickles been so sensual! The romance is slow building because neither feels they can cross the landlord-tenant line, yet each wants to. This slow-simmering attraction makes for an explosive first kiss that knocked my socks off. I appreciated the time it took to get to that first kiss, but also loved that once they decided to go for it, they let their passions take over. And while we all knew (to include the characters) that Alex would be leaving after his work was over, it didn’t make my heart hurt any less when things go down as predicted.

As much as I treasured Alex and Gretchen, it’s the two side characters of Cocoa and Grams who round out the book and give it heart. Grams’ character gives the story wisdom, and she provides just the right nudge to get Alex and Gretchen together. Meanwhile, Cocoa and his constant high fives provides humor and heart without crossing over into cheesiness.

Defending Hearts is a touching and heartfelt romance that hits all the right notes. I appreciate how the relationship was given time to incubate and blossom, and I love that Alex and Gretchen found how to be happy together. I felt connected to the pair, and loved their relationship with Gram and Cocoa. The story brought a few tears to my eyes, but overall left me uplifted and happy.

Globetrotting photographer Alex Murphy returns to Stewart Mills for a football fundraiser, but stays to document the football team and the town’s changes. Since his project includes photos of the Walker farm, he rents a room there.

Needing money to save the family farm, Gretchen Walker doesn’t have time to deal with the sexy photographer in her house. After all, Alex is a man with no sense of home, and to her, home is everything. But when she finds herself falling for him, she’ll be forced to decide where her dreams really lie…

Reviews in the Series:
Under the Lights by Shannon Stacey (Boys of Fall #1)