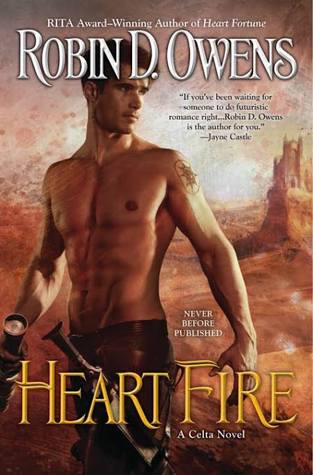 Psst. I missed a Celta’s Heartmates book last year because my reading schedule was full. Well, before the next title releases, Heart Legacy, on November 3, 2015, I HAD to read Heart Fire. Because, one does not simply skip a book in a series.

One of the things I love most about the Celta’s Heartmates series is that the main couple spend the bulk of the book kinda-sorta knowing they should be together, but battling their inner demons and working through stuff so they’re actually ABLE to be together in a stable, healthy, relationship. I also really like the Fams—‘familiars’ that are companions of the humanoids. They’re cats, predominantly. What’s not to like? I also geek out when couples from past books reappear. And they do.

It’s probably just me, but it seemed like the beginning third of this title moved a little slow. It definitely took me awhile to get into the world of Celta again, and that’s really my only complaint about the book. Might have been the depth of description; having read the prior titles in the series, I’m familiar with a lot of what was described. HOWEVER… this negative for me is definitely a positive for Readers-at-Large. This title *could* be read individually, although the full experience of revisiting characters from the past won’t be fulfilling.

Tiana is from a family that fell victim to religious persecution when she was a child. Now a priestess in a DIFFERENT religion, our leading lady stresses entirely too much over what people think of her. No. Really. She does. Tiana is dropped, by her superiors, into a timebomb—stemming from the destruction of her home, and the ensuing scandal. What’s pretty awesome about Tianna is watching her evolution as a person. We all ‘come from’ somewhere, and oftentimes that place defines at least a portion of our self-image. When we can’t reconcile events from our past, it takes a toll on our present, and definitely affects our future. Based on the details we get about Tiana, her self-image is closely tied to her perceived ranking in the social hierarchy. Watching events unfold made me reflect. Not too hard, though. Because, in general, I try not to care what others think (but we all know part of me does…), and I think as I get older, I actually care less.

Antenn, adopted son of an influential family, is working on the architectural project of his dreams. It will immortalize him for his technical prowess, and his name will be known for designing such a beautiful and everlasting building. Because Antenn is adopted, he has to wrestle his own demons before he believes his is worthy of allowing himself to find his HeartMate. At one point, I pictured Antenn on his knees, murmuring, “I am not worthy! I am not worthy!” He struggles with issues similar to those of Tianna, however.

I think the fact that the couple has similar, yet different, backgrounds gives them empathy for one another. Not the, “Oh, you poor baby!” empathy. But the gut-wrenching feeling when you know *exactly* how someone feels because you’ve totally been there. I think the way Ms. Owens draws her characters together, how they become a couple, is as important as the couple reaching happily ever after. While Heart Fire is surely fantasy at its best, the displayed relationships are quite realistic. Okay, sans the talking/telepathic cat and the sentient house. And the Flair (kinda like psy powers, or magic?!?). If I focus on JUST the journey Tiana and Antenn take—and a good chunk of it is together—It’s evident that while the couple may move rather quickly from acquaintances to oh-my-gosh-I-can’t-keep-my-hands-off-you-and-BTW-I-LOVE-you, they do things the right way. Which is refreshing.

I really enjoyed Heart Fire, Ms. Owens’ 2014 offering from Celta’s Heartmates. While I might have been a bit uncomfortable as a read a few times during my reading, that tension unfurled into the satisfied smirk I get when a book ends JUST RIGHT. I’m excited to read the next title in a few weeks.

On the planet Celta, accepting a HeartMate can be the greatest challenge in the universe…

Antenn, an architect hired to build a cathedral in Druida City, dares not think of his HeartMate. Even though he yearns for her, he’s taken steps to ensure she will be forever unknown to him. After all, how could he, a commoner who grew up in the slums, the brother of a murderer, be worthy of any woman?

Tiana, a priestess, has her own fears about being a HeartMate. She’s watched her friends struggle with such a stormy destiny. She’s sure her HeartMate has never claimed her due to a terrible scandal involving her Family, and she’s set aside hopes for love.

Antenn’s gotten the commission of his life. The cathedral will make him famous, but more, it will last for ages and prove to others he can contribute to Celta…if the controversial structure isn’t destroyed while being built. Tiana, too, is an integral part of this process, but the villain who wrecked her Family is ready with firebombs. Can they trust each other in dangerous circumstances to succeed…and to love?