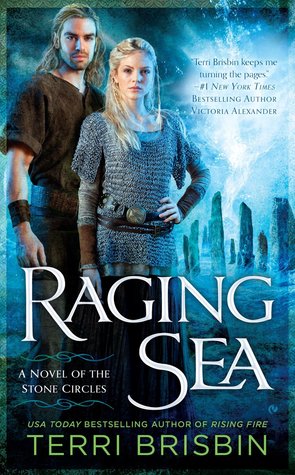 Even though I loved William in the first novel (and still do), I feel that Raging Sea is better than the previous novel, Rising Fire for several reasons. First, the connection and journey of Ran and Soren were stronger, more complex, and therefore a little more dramatic.  Second, the world-building is set so it was very easy to step into the world and be immersed in the plot, which was captivating.  And finally, the novel flowed really well.

William is still my favorite hero in this series (and he does appear in Raging Sea).  I enjoyed the romantic and story of William and Brienne in Rising Fire.  However, Ran and Soren had a history that made their connection even stronger and more compelling.  Though the betrayal really bothered me at first, it is clear from the beginning that all may not be what it seems.  Theirs was truly an inner battle between right and wrong.  I loved how the truth was slowly revealed, though my heart wished it had come out sooner.  Their painful past, coupled with the intense attraction, was compelling, and I enjoyed how their journey was entwined with the overarching plot of keeping Chaela imprisoned.  Their awakening to their powers and the truth of their connection was different from the previous novel.  I loved how strong the connection between them was and the reason behind it.  It was great to see that both Ran and Soren were strong on their own, but even more formidable when allied.

Ms. Brisbin keeps the tension of a chess match throughout the novel.  We experience the movement and the point of view of both sides as they try to gain the upper hand.  The antagonist is truly cunning and depraved.  He is truly a master manipulator, and I enjoyed watching him fall short (much to his surprise). Though the ending conflict was quick and a bit anticlimactic in a way, it fits with the overall chess match feel.  I am eager to see what happens in the next novel since the antagonist has lost the last two battles and Chaela is running out of portals to escape from.  Combine that with the losses our heroes endured and the regrouping they will need to do along with finding the next two bloodline warriors, and I can’t wait for the next book.

I continue to enjoy this series, the world, the mythology and the characters.  Because the world-building was already established in the first novel, Raging Sea flows much better.  The Stone Circles series is a compelling, enchanting, and epic series. If you enjoy Celtic myths, historic settings mixed with magic and romance, you just might need to pick up this series.

Eons ago, seven ancient deities trapped the goddess of chaos under a ring of stones. But now, in the darkest days of the 13th century, Chaela threatens to escape, leaving the fate of all humanity in the hands of two young lovers…

Ran believed herself to be a normal fisherman’s daughter, until a turbulant storm unleashed within her powers she never knew she had. Those powers have drawn her into the battle of two warring factions: the Warriors of Destiny, whom she knows in her heart to be noble, and a menacing army holding her father captive. Her hope for survival is in the hands of Soren, the man she once loved, the man who betrayed her, and the only man she can trust in a raging battle against evil.