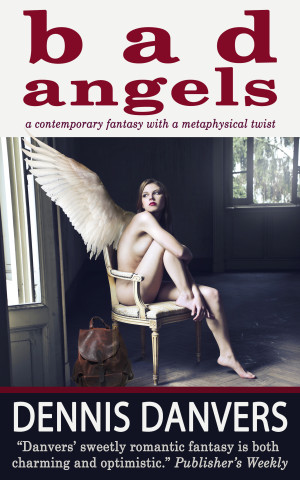 “No. Listen to me. Please. You won’t want to. You won’t mean to. But you will. I’ll remove myself. It will be as if I was never here, never intended to be here. Understand?”

“They’ll be gone. Undone. Even if they weren’t, you wouldn’t know to look for them. I’m sorry it has to be this way, but¾”

“Forget that,” George says and pulls her mouth to his and kisses her. Decisively.

“Oh my God!” Zoe screams. “Come quick!” She’s standing on the bluff, motioning wildly toward the river. They run to see, and Shannon spots him immediately, a kid in the water, slipped from the rocks upstream, hurtling downstream into serious, rock-filled rapids, without a boat, without a lifejacket, without a chance, his parents watching it happen, totally helpless.

Shannon doesn’t think about it. That’s always been her problem. She can’t ignore it. She steps out of her jeans, shrugs off her beautiful new cape, and falls toward the water in a power dive, using her momentum for speed, swooping low above the water, riding the updraft over the hot rocks, going as low as she dares. She’ll only have one chance. He’s right at the top of the worst of the whitewater now. “Hey kid!” she screams, “Wanna fly?” and his wide open eyes wheel around to her, he raises his arms, and she seizes them, jerking him out of the water just before he smashes into a huge boulder, pushing with her wings for a burst out of there, the water churning with bone crushing force, splashing her face and wings. The boy’s right shoe is sucked from his foot and shoots downstream and under. Shannon clears the water and hugs the island shoreline, and drops him improbably into a shallow still pool downriver where people are already running into the water to rescue him.

They all saw it happen, saw the angel save the boy, but they can scarcely believe it. That boy survived by some– some miracle. That’s close enough, isn’t it? Forget the wings. They don’t matter.

Now she’s really done it. Angels aren’t supposed to intervene in human affairs without direct orders from above. To do otherwise is to defy the will of God.

She flies under a busy pedestrian bridge that crosses over to the island, wheels around, spreading a little more oblivion among the onlookers, though some will have lingering miraculous memories anyway. The band has probably already spotted her. Sure enough. She sees their reflections in the water. Maybe a quarter mile overhead and falling.

The cemetery is somewhere above her to the right, but she can’t see exactly where. She’ll have to expose herself to view to get there. She banks left, circling out over the river, and sees she’s overshot the mark. She heads back downstream when one of the band hits her hard in the back and sends her tumbling. She plunges under the chilly water and lets it carry her downstream. She hauls herself onto a rock, her beauties wet and heavy. She shakes them furiously. A pair of angels are headed upstream converging on her in a V. There are more, certainly, above and behind, but they’ll attack in pairs. It’s safer that way. She keeps shaking.

She hops, last moment, from rock to rock, and manages to keep her balance as one of them clips her, and she spins. She gives one last furious shake, leaps, beating hard, managing to climb toward the bluff where a tiny Zoe is still screaming. Shannon clears the water, then she’s hit again and falls into the woods, landing hard in the middle of a trail. There’s a sharp pain in her right wing, and she wills it away. A mountain biker coming off a hill, spots her lying in his way and skids off the trail, tumbling down the ravine into the canal. She staggers to her feet. Angels light in the trees, on the trail all around her. They start toward her. They won’t speak, won’t listen. That would risk contamination. What if she made sense? That would ruin everything.

Then she hears human feet pounding down the trail. It’s George, running fast. He knocks one of the hollow-boned angels out of the way like he was made of papier mâché, they all fly up in a panic, and George scoops Shannon up in his arms and keeps running, accelerating. Even George can’t outrun a band of angels, but they can’t touch George without word from above, any more than Shannon could save that kid. Difference is, word will come. That angel he just knocked on his ass is the leader of the band, in the chain of command.

They reach an open stretch. An embankment covered with crushed rock slopes steeply up to the cemetery. You can just see a Confederate flag peeking over the edge. That’s where the stone angel is–and Zoe’s car. George starts churning up the embankment, rock flying everywhere. The band dives at them, hitting and grabbing at her when they can, hoping he’ll shed her to save his skin. Not George. He falls to his knees and slides, scrabbles on the rock until he finds his footing and makes it to the top, unceremoniously throwing her into the back of the car and screaming at Zoe to drive. “Head for the Interstate,” he tells her. The wail of their squealing tires fills the cemetery. All eyes are on them. There will be a lot of forgotten moments today.

A pair of angels land on the roof, try to reach inside for her, George grabs an angel arm and twists hard, and they’re gone. The car slithers out of the narrow, twisting cemetery roads and shoots out onto the street, sliding as it turns, flying downhill like a roller coaster. No one has to tell Zoe to drive fast.

George turns to Shannon in the backseat, cradles her face in his bloody hands. His hands are criss-crossed with deep cuts from the rocks, bleeding profusely. He doesn’t seem to notice. “Are you all right? I saw you fall. I was afraid…”

She hardly knows what to say. Battered and bleeding? Deliriously happy? Totally screwed? Mix and match? Fallen. Saved. Alive. She settles for, “I’m fine, really. Sometimes we take a fall.”

She kisses his bleeding palms to ease their pain, to heal them. “I’m fine,” she says. “I’m fine.”

Zoe pulls onto the Interstate and zooms out of town. Shannon doubts they can drive fast enough. The car’s covered with dust, visible for miles. No telling how many bands will be after them now, passing them off, one to another.

“Listen,” George says. “I want you to promise me something–that forgetting thing you were telling me about? Promise you won’t.” He’s still turned completely round. He really should fasten his seatbelt. Their hands are clasped together, all four entwined, bloody.

She could tell him he doesn’t realize what he’s asking, what it means, but that doesn’t matter, because it’s already too late. He doesn’t have to ask her. She’s already begun to live. “I promise,” she says.