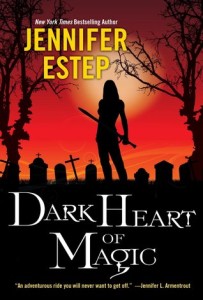 I shut Devon and Felix out of my mind, stepped forward, and took hold of the tree. The blood persimmon was old and sturdy, with lots of thick branches that would hold my weight. I’d always enjoyed climbing, no matter the surface or what I was scaling, and it was practically a job requirement for a thief, as it was often the most convenient way for me to get into and out of locked, guarded places where I wasn’t supposed to be.

So I shimmied up the trunk, then reached for the first branch. I quickly went up ten, fifteen, twenty feet, smiling all the while and enjoying the earthy smell of the tree and the rough scrape of the bark against my hands. I might be an official member of the Sinclair Family now, with a thin veneer of legitimacy, but I still liked practicing all my old tricks. You never knew when they might come in handy, especially with Victor Draconi plotting something against the other Families.

Finally, when I was about thirty feet up, that distinctive cheep-cheep-cheeping sounded again. I looked up to find the troll perched on a branch off to my left. The creature regarded me with open suspicion, its emerald-green eyes narrowed to slits, another blood persimmon clutched in its long, curved black claws, ready to chuck the fruit at me. Three fresh, jagged scars raked down the right side of the troll’s face, as if it had tangled with a much bigger monster recently—and won. This one was a fighter. Good thing I was too.

I wrapped my legs around the branch, making sure that I wouldn’t fall, then held my hands out to my sides, trying to let the troll know that I wasn’t here to hurt it. The creature kept staring at me, but it didn’t make a move to bean me in the face with the fruit. Finally, some progress.

I dropped my right hand down to my side and unzipped one of the pockets on my cargo pants. The troll cocked its head to the side, its small, gray, triangle-shaped ears twitching at the sound of several quarters jingle-jangling together in my pocket.

I drew out a dark chocolate bar, held it up above my head, and waved it back and forth. The troll’s black nose twitched, and its green eyes brightened in appreciation and anticipation.

Monsters might have more teeth and talons than the rest of us, but it was easy enough to deal with the majority of them. You just had to know what to bribe them with. Most of the time, a drop of blood or a lock of hair was enough to get you safe passage through a monster’s territory. Some monsters, like the lochness that Felix had mentioned, required quarters and other shiny coins, but tree trolls went in for more immediate gratification.

Dark chocolate, and lots of it.

“C’mon,” I crooned. “You know you want it. I’m just paying the toll for climbing your tree and invading your personal space—”

The troll scrambled down, snatched the chocolate bar out of my hand, and returned to its previous branch, its lightning-quick movements almost too fast for me to follow.

Its black claws made quick work of the wrapper, and the troll sank its needle-sharp teeth into the chocolate. More little cheep-cheeps sounded, but this time, they were squeaks of pleasure.

I waited until the troll had downed another bite before starting my spiel, such as it was. “Listen, little furry dude. I’m not here to make trouble. But you know how it is. You start acting out and throwing stuff at tourists, then the Sinclair Family is going to make you move on. You know that. So what’s got you so upset?”

The troll chomped down on another piece of chocolate, staring at me all the while, his green eyes locking with mine. Once again, his anger and worry punched me in the heart, mixed in with a bit of warm happiness brought on by eating the chocolate. Nothing strange there. Chocolate made me happy too.

But the longer I stared at the troll, the brighter and greener its eyes became, until they were practically glowing like stars in its furry face. It almost seemed as if the creature had the same soulsight that I did and was peering into me the same way I was into him. Judging whether or not I was trustworthy. So I focused on remaining calm and trying to look as non-threatening as possible.

Maybe it was a trick of the sunlight streaming down through the leaves, but I swear that I felt something … shift inside me. As if I were somehow calming down the troll just by staring at it and thinking good thoughts. Despite the hot summer day, a chill swept over me, cold enough to raise goosebumps on my arms.

I shivered and blinked, breaking the strange spell. The troll was just a troll again, and everything was normal. No glowing eyes, no odd emotions in my chest, no more cold chills. Weird. Even for me.

The troll cheeped again, then reached up and pushed back a branch beside its head, revealing a large nest.

Twigs, leaves, and grasses had been braided together in a crook of the tree, along with several candy bar wrappers. Looked like this particular troll really loved his chocolate. I scooted up higher on my branch so that my head was level with the nest. A moment later, another tree troll—a female given her dark gray fur—popped her head up out of the nest, along with a much smaller, fuzzier head. A pair of small, innocent green eyes stared back at me. The male tree troll handed the rest of the candy bar to the female, and she and the baby vanished back down into the bottom of the nest, out of my line of sight.

So the monster was watching out for his family, which was the reason for all the fruit bombs. No doubt the creature saw everyone who approached the tree as a potential threat. Well, I couldn’t blame him for that. Not in this town. I might be a thief, but I knew what it was like to try to protect your Family—mob or otherwise.

And to fail miserably.

The old, familiar, soul-crushing grief twisted my chest, but I shoved the emotion down into the bottom of my heart where it belonged.

“All right,” I said. “You can stay here until your baby is big enough to travel. If you’re looking for someplace a little quieter, there are some nice, tall trees over by the lochness bridge. You should scout them out.”

The tree troll cheeped at me again. I hoped that meant he understood me.

I pointed at him. “But no more throwing fruit at the tourists, okay? You leave them alone, and they’ll leave you alone. Capisce?”

The troll cheeped at me a final time, which I was going to take for a yes.

I unhooked my legs from around the branch and started climbing down. The troll watched me all the while, jumping from one branch to the next and following me all the way down the tree, but he didn’t throw any more blood persimmons at me. More progress. Maybe I really was a monster whisperer after all. I wasn’t sure how I felt about that.

When I was about ten feet off the ground, I sat down on a branch, flipped over, and let go. I plummeted through the air, letting out a happy laugh at the rush of the wind through my hair, before landing in a low crouch. I made a gallant flourish with my hand to add to my dramatic descent, then got to my feet.

Ms. Estep is generously giving away one (1) paperback copy of DARK HEART OF MAGIC to a lucky commenter. To enter, leave a comment sharing what is the best book you’ve read so far in 2015. Be sure to leave contact information, so we may contact the winner. The giveaway is open until November 1, 2015 at 12:00 AM midnight EDT. The contest is open to U.S. mailing addresses only, where not prohibited. The winner will be randomly selected from all eligible entries. All federal, state, local, and municipal laws and regulations apply. No purchase necessary. Contest is sponsored by the author; prize will be delivered by the author. By entering the giveaway, participants agree to abide by these terms.