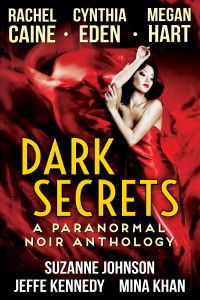 An except from Jeffe Kennedy’s contribution, Heart’s Blood.

Fortunately, Nix saved him having to strip her out of those soaked clothes, rustling as she undressed and climbed into her bed. It didn’t save him picturing her slim, delicate body in all her naked glory, but it helped calm the fury that had gripped him at the sight of her kneeling in icy muck, white and terrified, as Natilde berated her.

“Are you covered?” He asked, setting her little teapot on the grate to boil.

He set his teeth at the sound of hers chattering. Taking a deep breath, he turned to find her tucked in the corner of her bed, dwarfed by the mound of blankets pulled up around her so only her piquant face showed, framed by the fall of her ivory hair. Sitting beside her, he chaffed her arms through the covers. “I’m brewing tea for you. You’ll drink it and then you’ll tell me what is going on between you and Princess Natilde.”

Her enormous blue eyes darkened and swam with tears she didn’t shed. “Your Highness—please, no. There’s nothing to know. The princess was simply angry that I took her horse. I won’t do it again.”

That wasn’t it. Obviously it wasn’t, as Natilde hadn’t given a moment’s thought to the horses since she arrived. “Talk to me, Nix. I can’t help you if you don’t tell me the truth.”

“That is the truth.”

“Please, Cavan.” Nix leaned in beseeching him, seeming unaware that she’d used his name so familiarly. “You can help me by leaving me alone. You shouldn’t be here, talking to me.”

“You seem to forget that this is my castle, my kingdom and—after my father and the High King—only I decide what I shouldn’t do.”

She jerked back, a frustrated refusal that revealed a surprising glint of temper. The movement caused a lock of her hair to fall across his hand, a sensuous glide of silk. He wrapped it around his finger, somehow unable to help himself, mesmerized by the almost magical whiteness of it against his sun-darkened skin, the seductive texture. She made a small sound and he dragged his gaze up. Staring at him with emotion stark on her face, she filled him with a tide of longing he could no longer resist. Moving slowly, feeling like he walked in a dream, as if he knew her from those dreams, he slid his other hand behind her slender neck, urging her closer, brushing her mouth with his.

Cool and petal-soft, her lips yielded, then parted, allowing him into the startling fire within. He deepened the kiss, starving for more, and she moaned, pressing into him. She tasted of spring, how pink rosebuds look trembling against a blue morning, and she fit against him in a way that made him feel both fiercely protective and desperate to pull the blankets away, to stroke her naked skin into heat.

But she tore her mouth away, pushing against his chest with surprising fierceness, so that the covers fell off her dainty shoulders. “No, you can’t!” She stared him down, full of regal command. “Think, Cavan. You promised.”

He’d promised not to touch her. Cursing himself, he rubbed his face. “I’m sorry, Nix. I didn’t mean to frighten you.”

“No.” She fought a hand out from under the blankets and laid it on his knee. Only she could go from chastising to comforting in a flash. “You didn’t. You never could. But your honor, your wedding vows—you can’t do this. You would never forgive yourself.”