Audiobook review: Brighter Than the Sun 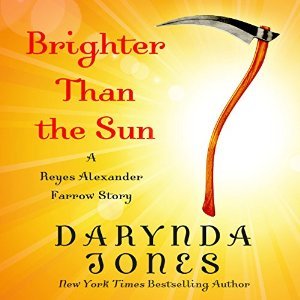 Brighter Than the Sun is a story for fans and readers of the Charlie Davidson series by Darynda Jones. Told in the first person, present tense voice of Reyes, the novella recounts his life from Charlie’s birth to a point sometime within the first book of the series. I don’t recommend this story for those who have not read the series because, although it is a prequel of sorts, knowledge of the two main characters, Charlie and Reyes, is what makes the story interesting and why it worked for me.

The narrative voice is very odd, in that it is told in present tense, but it is a history of Reyes’ life. It mostly worked, but I felt like I was being taught a history lesson rather than experiencing an actual story with a plot.

With that said, some of Charlie’s humor still works its way into the tale, even though it is generally a much darker story. Reyes doesn’t have share Charlie’s ADD tendencies nor her sarcastic outlook on life, which makes the story is very straight forward, and I really liked seeing certain events from Reyes’ POV.

My biggest complaint, which really irritated me, is that Reyes makes an off-the-cuff comment about the impending horrible future of one of the major characters in the series. WTH?! Why toss something that big out there as a small footnote in a side novella?

This is the second story in the Charley Davidson series that I’ve listened to rather than read, and I find that I’m enjoying the stories more this way. The narration by Lorelei King is good, although I still hear Mercy and Adam from the Mercy Thompson series because I have listened to several more of those titles. But Ms. Lorelei is a master at her craft, and she truly helps bring to life these stories.

Overall, Brighter Than the Sun is an interesting tale but not a genuine story. It’s a history lesson told in present tense. I liked it, but it’s not a standalone story in that knowledge of Charlie and Reyes is needed to really embrace this tale. And since I fall into that category, I enjoyed this short journey into the mind of Reyes.

All his life, Reyes Alexander Farrow has suffered the torments of the damned. Only one thing has given him hope: the woman who radiates a light that no mortals can see; a light that only the departed can see…

Told from his point of view, BRIGHTER THAN THE SUN chronicles the first time Reyes ever encountered Charley, and how their relationship has been the one thing that can either save him or doom him.

7 responses to “Listen Up! #Audiobook Review: Brighter Than the Sun by Darynda Jones”