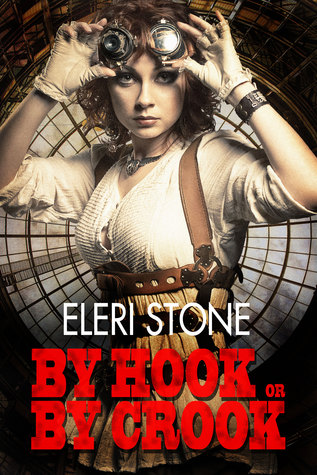 By Hook or By Crook
Author: Eleri Stone
Reviewer: Jen Twimom
Rating: B+

Note: The author and Carina Press put out a free prequel novella, The Adventures of Cassius Flynn and Molly McGuire, which I recommend reading prior to By Hook or By Crook, as it shares quite a bit of the couple’s mutual history. I’ve included my review of the novella at the end of this post.

Cassius Flynn and Molly McGuire have always made good partners. So out of a sense of debt and because she still cares for him, Molly agrees to help Flynn on a spy mission for the Rangers, even if it means she has to pretend to be a lady and mingle with the Scrapers. Having recently turned from his smuggling ways, Flynn is trying to create a life that is stable and one which Molly would be proud of. He thinks having her come up into the cities will give her the chance to relax and enjoy how the other half lives.

After following Molly and Flynn dance around one another through a couple of the Reaper titles, I was very excited to read their romantic story. I am happy to report that By Hook or By Crook did not disappoint. Molly and Flynn’s journey is sweet, passionate, and an exciting adventure! Ms. Stone drops readers right into high adventure and action as Molly and Flynn attempt to secure a treasure left in a Reaper-infested town. Right from the start I was on edge; the tension is high and well detailed.

Flynn is an interesting character who started life as a wealthy scraper, then turned his back on his corrupt stepfather, Stark, to become a smuggler on the plains. But Flynn never could just walk away from Stark, taking every opportunity to needle him and hamper his business efforts. This need for continual vengeance is what ultimately puts Flynn and Molly back in Scraper territory and in danger. Yet, Flynn loves Molly with all his heart and wants to be a better man for her. These conflicting drives and emotions are what makes Flynn the man he is, and unfortunately, sometimes blinds him to the truths around him.

Equality as complex and exciting, Molly is fairly content with her scavenging lifestyle. She’s had a tough life, yet while those around her always let her down, she refuses to allow the actions of others dictate who she wants to be in life. In fact, she turned down Flynn’s marriage proposal because she was worried he’d try to change her. Yet when Flynn chased her down, Molly knew she couldn’t give him up again. I admire Molly’s honesty and self-reflection. It’s so evident the more we see into both Molly and Flynn’s psyches that each think their own motives and actions are obvious to the other, but they aren’t. I adore watching the pair learn to open up and share bits of their inner selves, ultimately growing into a beautiful love.

All-in-all, Molly and Flynn’s romance was exactly what I wanted for the pair. They are true equals and a perfect match. Just as exciting is the overall adventure the pair experience while trying to make their way out of trouble. My only complaint is that there are still a number of outstanding items left unfinished from the first couple of books, leaving me a bit unsatisfied at the end. However, as a standalone story, By Hook or By Crook shares a delightful and heartfelt romance, set in and around a high action adventure.

Postscript Note: The loose ends were bugging me, so I asked the author about it. She replied that she is intending to write one more Reapers series title to tie up the loose ends. YEA!!

Flynn was born in the lap of luxury—a Founder’s son and heir to the Stark fortune. Of course, Molly hadn’t known that when she fell in love with the devilishly charming smuggler. If she’d known that Flynn was a Scraper back when she first met him, she probably would have hated him just on principle.

Molly was born in an outlaw camp, the daughter of a whore and a gambler. She was a street rat who didn’t belong in the glittering sky city where Flynn wanted to take her as a spy for the forts. She wasn’t ever going to turn into a lady, no matter how many fancy gowns Flynn dressed her in.

But maybe while they were there, she’d be able to talk Flynn into giving up on his plan of becoming a respectable businessman, and things could go back to the way they should be—her and Flynn raising hell, the scourge of the western skies. Blood didn’t have to be destiny, did it? And if Flynn could choose the future he wanted, then what was to stop her from doing the same?

Purchase Info:
By Hook or By Crook (Reapers #4) 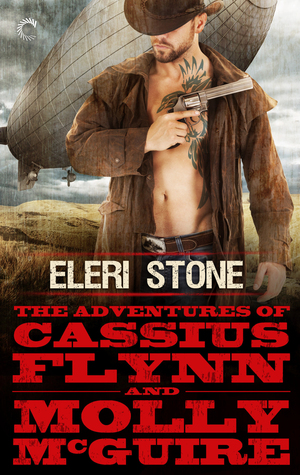 The Adventures of Cassius Flynn and Molly McGuire by Eleri Stone is a free novella set in her wonderfully unique Reaper series world. The two main characters are side characters in the series, although they play a bigger role in the most third novel, Ride to Ruin, which takes place after this novella, chronologically. While you don’t have to have foreknowledge of the series to enjoy this short, I felt it made for a richer read having met the characters prior to this story.

Molly is an outlaw who salvages treasures from towns that have been overrun by Reapers (think really fast, somewhat organized zombies). Flynn is a reformed smuggler who needs Molly’s help stealing something from Flynn’s adopted father. The pair have a history – a year ago he proposed and she ran out, stealing his airship – and this history gives the pair an extra spark right from the start. And while I will classify this story as a romance, it does not have an HEA or even an HFN… it is more like the middle chapters in the couple’s eventual HEA. Normally, I don’t enjoy those types of stories that aren’t “complete HEAs.” However, in the case of Molly and Flynn, call me a sucker. I adore this pair and find this adventure exceptionally lovely, and very thrilling, albeit short.

Molly and Flynn share passion for life, adventure, excitement, and most importantly, one another. Their reunion scenes scorch the pages, both sensual and loving. My heart aches for this couple who longs for one another, but they aren’t quite in a place where they can be together. The Adventures of Cassius Flynn and Molly McGuire whet my appetite for more of their thrilling adventures!

4 responses to “Review: By Hook or By Crook by Eleri Stone + bonus review”