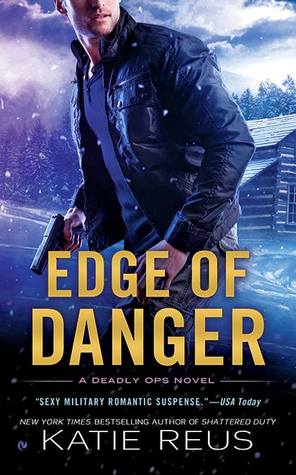 Overall, we liked the latest installment in Ms. Reus’s Deadly Ops series, Edge of Danger.  The political suspense drama kept us glued to the pages even though the romantic journey struck an odd chord with us.

After the last novel in the Deadly Ops series, we wondered who the newest big bad would be and what would happen next.  We were not disappointed.  Having the DEA agents we briefly met in the previous novel, Shattered Duty, take point in this one was a nice transition.  Tucker was a fascinating character in Shattered Duty and we liked getting to know him better.  However, having it start with the death of his mentor, Max, and his team targeted by assassins wasn’t quite what we had in mind.  As the story slowly unfolded, it was gripping to watch as Tucker tries to protect his team while clearing their names and finding out the truth behind Max’s death.  This overall plot that resolves at the end of the novel was interesting.  Even though we have the point of view of the villains, it was still mesmerizing to watch the team work to identify, locate, and apprehend them.

What felt a bit odd was the romance between Tucker and Karen.  Although we appreciated their journey, it just happened so fast.  Considering it started with Tucker kidnapping Karen, we were surprised at the instant lust that was burning between them and how quickly the passion blossomed.  In the course of a week, Karen and Tucker go from kidnapper and victim to being in love.  It was a bit of a stretch for us.  However, the epilogue redeemed their love story for us.  We found the epilogue (which occurs six months later) to be funny, passionate, and sweet.  It was a delightful end that also showed that they had continued to date and get to know each other before jumping into anything.

Overall, we liked Edge of Danger.  The political suspense was gripping, and although the romance moved too quickly for our tastes, the epilogue redeemed their story.  We look forward to more in this Deadly Ops series and can’t wait to see who will be the focus of the next novel.

When an assassin tries to kill undercover DEA agent Tucker Pankov the same week his boss is taken out, Tucker has good reason to be paranoid. And when other members of his elite team are not only targeted, but stripped of top-secret security clearance, Tucker has one shot at discovering who wants them dead—and why. So he kidnaps the only woman he thinks can save them.

Brilliant NSA analyst Karen Stafford doesn’t like being forced into anything, especially by someone she doesn’t trust. Yet after a hijacked US-owned drone starts attacking government installations resulting in mass casualties, Karen has to take Tucker’s side.  Now, two unlikely allies must unite to prevent an escalating and unthinkable terrorist conspiracy. But as Tucker and Karen grow intimate, they realize the conspiracy runs deep, and their enemies are closer than anyone realized.

One response to “Review: Edge of Danger by Katie Reus”