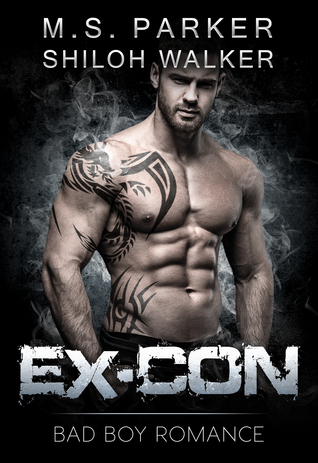 I absolutely love a good suspense wrapped around a fabulous romance. M.S. Parker and Shiloh Walker have created an intriguing story with a well-crafted plot that kept me riveted to the page. Ex-Con: Bad Boy Romance leads the reader down a trail, splits the path, and hops on a highway. The best kind of suspense.

Carly grew up the daughter of a famous musician. I connected with her in a lot of ways—not that I have money or anything—but because she lived in a shadow, and had to put on a facade for the public. People didn’t *really* know who she was—only what she let them see. Watching her evolve from a cantankerous, saucy girl into a woman that cared deeply about things was one of the highlights of the book for me.

Can’t discount Bobby though. After living through a stint in prison for killing a man—in a self-defense situation—he did his time and was paroled. Doesn’t mean it didn’t screw up his life. Doesn’t mean he didn’t have regrets. Doesn’t mean he didn’t still think he was a piece of crap, and didn’t deserve happiness. Bobby is the character I really connected with. As he grew through the book, learning to trust and learning his own value, he started to care for people. Sometimes, we don’t realize our own value. We don’t have to go through something like Bobby did—life just hands us a bad hand and we have to deal with it. And we have to deal with the aftermath. Taking a character that’s had it rough and persevered to become a beautiful person gives me hope with the students I teach, too.

Watching Bobby and Carly develop as a couple was pretty spectacular, too. There’s one character, a father-figure for Carly, that we lose through the course of the story, and if you follow my reviews at all, I nearly had to put this title down. He dies from cancer, and that’s a HUGE trigger for me. We’re talking down the proverbial rabbit hole for days. I may have some fallout from that little foray, but it wasn’t a big part of the story (the cancer itself), so I’m thinking it’ll be okay. Probably. The reaction of Carly and Bobby to the death of this character was… unique.

The suspense part… threats against an ‘innocent’… I just need to say well-played, Parker & Walker, well played. I usually can figure out what’s going on in a RS by halfway through, but this time there were enough legit red herrings planted in the plot that I was biting my nails until the end.

Romantic suspense titles are always hard for me to write reviews for. I don’t want to give anything away. I was captivated by the intensity of Ex-Con: Bad Boy Romance from page one. Usually, it takes me a minute to get into a RS, and this was definitely an exception to that rule. This is the first time I’ve read anything by M.S. Parker, but I found a lot of Ms. Walker’s voice throughout, and enjoyed the subtle differences in the story, style, and plot arc. As a die-hard Walker fan, I highly recommend her fans pick up this title. I’d definitely be interested in picking up more titles by this duo.

I was an ex-con. A convicted killer. And I knew that’s all anyone would ever see me as. At least I thought so…until I met her…

When recent parolee Bobby Cantrell loses yet another job, he resigns himself to the usual struggle of finding a place willing to take a chance on someone with his past. Then, without warning, a gorgeous blonde careens into his life and everything changes.

Carly Prince. Gorgeous. Untouchable. Everything Bobby could ever want and knows he can never have.

Except, maybe, he’s finally found someone who sees the good inside him, something even he can’t see.

What he can’t do, however, is escape from his past. A past that now threatens to destroy the new life he’s building for himself…and threatens people he’s come to care about. Can he save them, or will he have more blood on his hands?