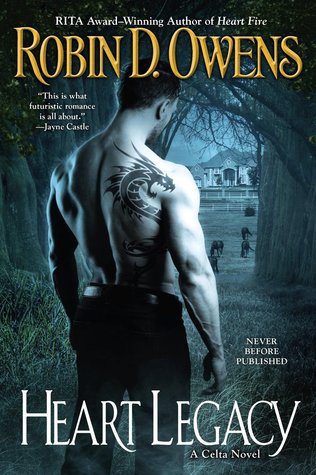 Robin D. Owens continues to keep the world of Celta alive and—hotly—kicking with her newest Celta’s Heartmates release, Heart Legacy. As the fourteenth book in the series, I always wonder how an author can breathe new life into the same world. Ms. Owens managed to keep me hooked from first word to last. I was happy to revisit the world of Celta, as it’s one of my favorite magical places to go.

One of the great things about this series is getting to see the progeny of main characters from other books. I appreciate the fact that Ms. Owens hasn’t created a spin-off for these sons and daughters. In Heart Legacy, we get to learn more about Draeg Blackthorn. Oh. My. He’s a bad boy that is conflicted. Watching him grow—first as an undercover spy to discover what the deal is on the Yew estate, and then as his love for Lori matures—was… different. Many times, I wanted to shake this hunk-o-man that was so clearly smitten with Lori. Other times, I wanted him to admit his deception and clear the air with her. As I read each of his interactions with people he’d grown to care for, I realized how truly damaged he was as a hero. The heartbreak he’d endured. I found I empathized with his character, and had a common kinship because he played a role in which he had to hide away who he *really* was.

Lori also drew me in. Many of the same things I liked about Draeg were paralleled in Lori. Ms. Owens crafted these characters so they would have several integral emotional traits in common, creating believable characters in her world of Celta. I think what connected me most with Lori was how she hid her true self from her family—a fact Draeg couldn’t grasp. Lori knew her family, and what they expected of her. She played a role, and had a function within the Yew family unit. What made her believable to me was her connection with animals—they seemed to be her place of peace, especially when her family pressures became too much. She found something from which she could derive joy and drew from that joy in times of upheaval. Another thing I really liked about Lori was the way she developed a plan to leave the only home she’d ever known, and stuck with it. I think her plan to leave drove the story forward. At first, we didn’t know when Lori would implement her plan—the timeframe changed as circumstances presented themselves. What I admired most about Lori was her tenacity. Even when she discovered Draeg wanted her to stay and fight for her birthright, she stuck with her plan.

Unexpected circumstances pop toward the end of the story. This is one of the things I adored about this book. Even though I felt I had everything figured out, things did NOT go as I’d predicted. Always a great feeling, to be surprised by the ending of a novel you’ve loved.

I look forward to continuing my journey through the world of Celta; Ms Owens can’t write these books fast enough for me!

After the death of GrandLord Yew years ago, the Yews withdrew to their self-sustaining estate and disappeared from Celtan society. The current head of the household is believed to be eighteen-year-old Loridana. To find out, Draeg Blackthorn has been sent to the estate to spy, undercover as a stableman for the stridebeasts—beautiful creatures that hold a place in Lori’s heart no member of her family ever could.

Bullied by her family, Lori has decided to abandon her bloodline and live on her own with her true family—her animals. When Draeg discovers she’s rejecting her heritage, he’s appalled. He’s come to love the land as much as the woman, even spinning small fantasies of marrying Lori and becoming Lord and Lady of the manor. Draeg wants her to stay and fight her elders. For Lori, it’s an alternative that could render her absolutely powerless to pursue her own destiny, and drive her further away from her perfect dreams and the man she loves, Draeg.