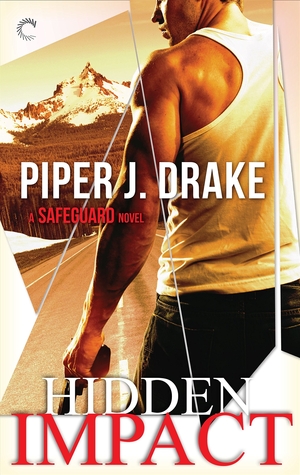 Although Gikany and Una are not huge romantic suspense readers, we couldn’t pass up the opportunity to read PJ Schynder’s new series (written under the shiny new alter ego, Piper J. Drake).  Even though the romance may have moved a little too quickly (something Gikany and Una debated), the tension-packed storyline was incredibly gripping.  Hidden Impact is a stunning new start in the passionately suspenseful Safeguard series.

We won’t lie, the lust starts early, but thankfully it is lust with the possibility of more.  Maylin is looking for a distraction and some comfort, and indulging in the attraction she has for Gabe (and since Gabe feels the same attraction and passion, he doesn’t refuse).  They don’t instantly fall in love.  They take the time to get to know each other.  However, Una thought this took place over a longer timeline than Gikany.  Either way, they take steps towards a true relationship which we really liked.  We liked how they do question themselves and what they want.  They both think about what the ramifications of a relationship would mean and what the future might hold for them.  These thoughts, along with the time spent, really grounded the characters, giving the romance an honesty we respected.

What we enjoyed, though, was that Gabe and Maylin’s romantic journey was nicely woven with the plot of Maylin’s missing sister.  The complexity of the situation and the planning and research were fascinating to experience.  This was the strongest element of the story, with the romance being just a sweet treat along the way.  The balance between these two major plot lines was perfect, they were woven seamlessly together, and we really liked how it felt like each was equally important.  The realism of Gabe’s work felt grounded and well researched.  The tension and suspense of finding Maylin’s sister was well done and we found it was difficult to put the novel down.

Hidden Impact is a great start to what may be a gripping and fascinating new romantic suspense series with a military flair.  It’s a great read to take with you and escape the world for a bit.  We can see ourselves reading it again because we really enjoyed the varied characters, the action and drama and the world that Ms. Drake created.  We eagerly look forward to the next installment in this new Safeguard series.