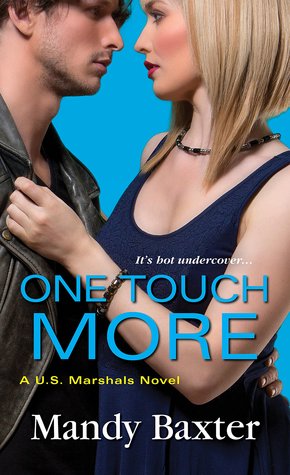 Parker Evans has been undercover for the U.S. Marshals long enough that he’s having trouble separating the “real” Parker from his undercover persona, Damien. He chooses to be called Damien and suppress his emotions so that he won’t become soft, making it difficult to fit in with the criminals when he goes back undercover. His current task is to try to capture an elusive drug dealer.

Working as an assistant manager of a suites hotel, Tabitha Martin is trying to put herself through nursing school. She has a thing for bad boys, but unfortunately, her ex-boyfriend, Joey, is truly no good. This drug-dealing ex is blackmailing her into allowing deals to take place at her hotel. So when super-hottie Damien starts working for Joey, Tabitha tries her best to stay away from the trouble he will bring into her life. Unfortunately, that’s not as easy as she would hope.

Although I’ve liked the previous two titles in the U.S. Marshals series, they both were lacking a bit. Well, I figured out what the series has been missing… Damien Evans. Holy hell! He is a tattooed-bad-guy bit of yumminess. So long undercover, he’s seen and done things he can’t ever forgive. But his heart of gold shines when he finally meets the one person who makes his messed up world make sense. Damien is full of passion that infuses everything he does from taking out the criminals to loving his woman. And WOW do the sparks fly between Tabitha and Damien. Additionally, the overall action and undercover plot were exciting and seemed more realistic than the prior two stories, which made me very happy.

Equally spectacular is Tabitha. She’s hard, tough, yet full of love. She protects what is hers and helps those who need it, even if they don’t deserve it. And she’s extremely perceptive and smart, which not only creates an interesting and engaging persona, but also prevents a story that could have easily been filled with one misunderstanding after another. I love that although both Tabitha and Damien have secrets, each allows the other to see bits and pieces of the real person below, leading to a deeper relationship.

In the end, I really loved reading this story. One Touch More is an action-packed ride; utterly sexy, hot, and full of intense emotions. Having the story shared from dual POVs kept everything balanced, and I liked that right from the start the pair felt a powerful connection. This, plus the constant danger surrounding the pair, allowed for heightened passion. Both wanted to be open and honest, while struggling to do what was best. I loved this couple and wanted to see them succeed; which made for a wonderful story.

Strong, relentless, and lethal, he plays every angle to trap the worst criminals. But for the one woman he can’t resist, he’ll break all the rules…

For hotel manager Tabitha Martin, bad boys usually spell disaster. And her new guest promises just that, with his formidable build, tattooed biceps, and quiet take-no-mess attitude. Tabitha is already putting everything on the line to escape her vicious drug-dealing ex’s control for good—but a single sizzling moment in “Damien Evans’” arms has her wanting all the trouble he can give…

He’s been undercover too long and likes living dangerously too much. U.S. Marshal Parker Evans figures maybe that’s why he doesn’t immediately put Tabitha in custody. Sure, she’s his one chance to finally take down a major drug ring. But every minute he protects this mostly innocent blonde leaves his heart all too vulnerable. And the cost of desire could be a deadly endgame…

4 responses to “Review: One Touch More by Mandy Baxter”