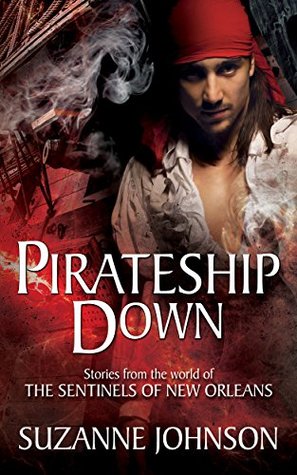 Pirateship Down is the compilation of several previously released shorts, many that have only appeared on blogs and websites, and one new novella, all set in the marvelous Sentinels of New Orleans world. Each story features one or more of the series’ regular characters. This book is basically a companion piece to and compendium of the series, and therefore, is best enjoyed by existing fans of the series. I would encourage those who’ve not read the series, start with the first book, Royal Street.

Talk Like a Pirate
This story takes place before first Sentinel book and features the historically undead pirate (privateer) Jean Lafitte. Thinking it would be fun to have a real pirate show up at her “talk like a pirate party,” Meg attempts to manifest the ghost of Jean Lafitte. Much to her surprise, the real Jean appears, and roommate Rhyn takes it upon herself to ensure Jean doesn’t cause any trouble in modern-day NOLA. Overall, the short story is fun, and I liked seeing interactions between Jean Lafitte and Wizard Gerald St. Simon long before the current conditions of preternaturals in NOLA.

Lagniappe: The Sentinels Multiverse
This is not a story per se but more of a primer on the world.

Alex, the Pig
This is an excellent story narrated by series heroine, DJ Jaco. It is a super short scene that takes place between River Road and Elysian Fields. Boyfriend, Alex, leaves DJ with a pig that is actually a cursed leprechaun. Extremely entertaining.

Cat Mon Dieu
This is another short, flash fiction piece, and same timeline as the previous story. It is told in the third person POV of Jean Lafitte. He’s going grocery shopping with DJ and thinks cat food is actual food made of cat. It’s another funny short.

Lagniappe: Jean Lafitte-The Man, The Myth, the Undead Pirate
This section shares both true facts about Jean Lafitte and more about his character in the series.

Rivalry
This is a short story that I had read previously. Shared from Alex’s POV, it takes a look at cousins Jake and Alex Warin in their teen years, well before the events of the first book. Here we learn the story of when Alex discovered he was a shapeshifter at 15. Another great short, giving more depth to one of my favorite characters.

Swamp Rats
This one takes place shortly after second book and features weregators. The scene outlines DJ negotiating a truce over territory for the merfolk and weregators. I liked it, but not as much as other stories in the book.

Danger: Curves Ahead
Taking place between the second and third books, it features a bet between DJ and Alex. It’s a very short funny that plays on the pair’s mutual attraction. I adore this couple and enjoyed the story.

Lagniappe: A Sentinels Bibliography
This is a list of reference books that Ms. Johnson used to help create her world.

Intervention
This is another story about Alex and Jake, roughly two to three years before the series started, and is told in the third person POV from Alex. Jake has found himself getting into trouble because of his new girlfriend, and Alex finds out she’s not human. It’s an interesting slice of life.

Pirateship Down
Pirateship Down is the feature story of Pirateship Down. It’s a brand new novella and is roughly 50% of the whole book. Shared in the first person POV of DJ, it takes place between the third and fourth books.

DJ and Jean were injured in the third book and are supposed to be recovering. However, DJ catches Jean and Rene planning to reclaim one of Jean’s lost ships that has recently been found by LSU, and she realizes she has to go with him or things will turn out badly. Of course, Jean being Jean, he gets himself arrested and things get crazy from there!

I really enjoyed the novella. I love watching DJ, Jean, and Rene work together and how their friendship continues to grow from book to book.

A short story collection set in the Sentinels of New Orleans world, including the all-new novella, Pirateship Down.

French pirate Jean Lafitte is tall, cobalt-eyed, broad-shouldered and immortal. What’s not to love? But New Orleans’ most esteemed member of the historical undead is headed for trouble: He’s determined to reclaim Le Diligent, his gold-laden schooner lost at sea in 1814 and recently found at the bottom of the Gulf of Mexico near Terrebonne Parish, Louisiana.

New Orleans’ wizard sentinel DJ Jaco and her merman friend Rene Delachaise can either lock Lafitte up or save him from himself, joining him on a road trip to Cajun country. Terrebonne Parish—not to mention its jail—might never be the same after the events of the all-new novella Pirateship Down.

Wizards and Cajun mermen, sexy shifters and undead French pirates. Welcome to the world of the Sentinels of New Orleans in this first collection of new and revised stories, along with a little Louisiana lagniappe.

Purchase Info:
Pirateship Down: Stories from the world of The Sentinels of New Orleans

13 responses to “Review: Pirateship Down by Suzanne Johnson”