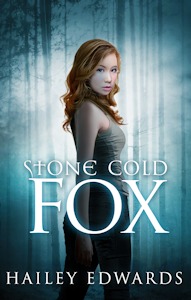 Shut. The. Front. Door. I didn’t think it was possible to love one of Hailey Edwards’ characters more than I did Thierry. First, I’m totally going to gush about the whole Black Dog world. While Mai’s book, Stone Cold Fox, isn’t *technically* part of the Black Dog series, anyone who’s read about Thierry’s adventures already knows and loves Mai. Readers new to the series? Okay. This’ll whet your appetite, but be warned—it’s spoilery to the series featuring Thierry! If you haven’t partaken of the Black Dog books, I do highly recommend them.

I adored this book for so many reasons. First, my attention was immediately snagged because: COSPLAY! Oldest and Middle cosplay, and I immediately connected with Mai because of her interest in this activity. I may be more behind-the-scenes, doling out advice on creation of various cosplays or ways to do makeup, but I still get a thrill every time I see my kids (ADULT kids…) in a new cosplay done especially well. Second, LABYRINTH. If you’ve never seen Labyrinth, the cult-classic movie starring David Bowie as Jareth, I don’t think we can be friends. Just kidding. I’m always willing to spread the love of one of my favorite movies from back-in-the-day. Mai wasn’t a relatable character for me just because of her cosplay choices. I loved watching her growth through this lil 100-pager. Dawning realization about her past, copious amounts of Ben & Jerry’s, and the love of a good friend—Theirry—support Mai through mob princess-like difficulties that could only *actually* happen in a paranormal world. Which I loved.

Ryuu is a pretty interesting character, and I don’t think we learned enough about him early on in the story—by design. I heaved a huge sigh of contentment when all my pressing questions were answered toward the end of the story. Which means I can’t talk about him a lot. I do, however, want to mention how much I admire him. He’s a make-a-decision-and-stick-to-your-guns kind of guy. No waffling.

Stone-Cold Fox is definitely an excellent addition to the Black Dog universe. I look forward to seeing more of Mai and Ryuu, hopefully, in the future—because I need to know MORE! I’m also super excited about the January 30, 2016 release of another title from the Black Dog world—Gemini: Dead in the Water. This is a spin-off series, and it’s denoted as Gemini #1 for series name on Amazon, so my greedy little reading heart has hopes of many more books set in this universe to come!

Mai’s plans for a weekend of cosplay fun and games at Fan Expo come to a screeching halt when a smokin’ hot fae with a vendetta against her father decides the best revenge is claiming her for his own.

Her father cost Ryuu everything: his home, his family…and his mate. Ryuu wants his pound of flesh, and he’s willing to take it out of Mai’s hide, bite by sensuous bite.

While she’s quick to bare her teeth and snap at Ryuu’s gentling hand, she sheathes her claws once he offers her secrets about her life and her father that rock the foundation of her world.

Caught between Ryuu’s tender persistence and her father’s iron will, Mai’s not sure who to trust, but before it’s all over this kitsune will show them both why she’s one stone-cold fox.