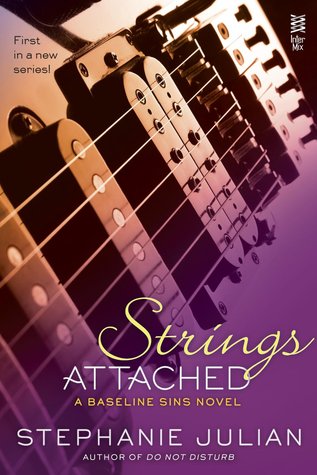 Trudeau Morrison manages and runs ManDown Films for famous producer Greg Hicks. She is a self-made woman, who has a plan for her life and is determined to work hard to make it happen. However, ever since Greg hired rock star Sebastian Valenti to score his latest film, Tru has found it more and more difficult to stay on task.

After years of mega-stardom as the guitarist for Baseline Sins, Sebastian Valenti almost lost his life in an accidental overdose and breakdown about a year ago. While staying with the Golden Brothers at their ritzy hotel for a much needed break, Baz befriended Greg Hicks and eventually started working for him. But now Baz realizes he’s starting to miss his bandmates and friends, and wonders if he is too broken to have that rock star life again.

While Strings Attached is listed as the first book in the new Baseline Sins series, it is actually the fifth book in Ms. Julian’s Salon Games series. While one could jump in and read the book as a standalone romance, I feel readers would really miss out on much of the world building and character development of the supporting cast if they skipped reading the original series. I was immediately sucked in to Tru and Baz’s story because I’d read about both characters in the previous books.

Although Tru and Baz are like oil and water and bicker constantly, they have great chemistry. The “opposites attract trope” is at its best as we witness the pair combust under an intense mutual attraction fueled by a genuine concern for each other. All it takes is seeing one another outside the usual work environment to ignite the flames. But it’s not all sunshine and roses, as Tru’s brain overrides her sexual desire and need. Tru is all the more real to me, as she tries to remember what her life plan is and why she needs to stick with it. I’m very much the same Type-A, planner persona, and can relate to her internal conflicts as she pushes forward, trying to understand and deal with (in an orderly manner) her own emotions.

What makes this story so enjoyable are the supporting characters who surround this couple. They aren’t just window dressings, showing up from book to book, but rather, confidants who help the main characters better understand their own actions and feelings. The heart-to-heart conversations and actions of friends bring the story around and help drive the plot towards its conclusion. And, especially in respect to Baz and his former bandmates, those conversations inflict genuine emotions and at times, a sniffle or two.

As much as I loved this one, I had a couple of small issues. It’s hard to get into what the issues were without spoilers, but generally it has to do with certain comments and a specific situation between Baz and his former best friend. The comments, in the form of introspection by Baz, felt oddly out of place and forced into his thought pattern to possibly set the stage for a later conflict that really never happened. Similarly, the specific action that occurred also felt out of place and was never fully addressed before the end of the book. Again, it felt like I was being set up for a conflict that never happened, and I was a bit disappointed and annoyed.

In the end I loved Tru and Baz, and I truly hope we get more of the couple, because their story really isn’t over. Although they found happiness in the last few pages of the book, they still have several obstacles to hurdle before a true HEA. Strings Attached is an emotionally intense romance between two beloved characters finally getting their chance at love. I absolutely adored Tru because I related to her plans and insecurities, making the overall story that much more meaningful. I look forward to seeing what Ms. Julian has in store for the rest of the members of Baseline Sins.

On the surface, Sebastian “Baz” Valenti is a rock god with the lifestyle to match. With his drop-dead gorgeous looks and his band, Baseline Sins, at the top of the charts, he can have any woman he wants. But the constant touring and recording has taken its toll. Now he’s turned to scoring films, a gig that has introduced him to the one woman he really wants but can’t have…

Trudeau Morrison is all business all the time. As the managing director of ManDown Films, it’s her job to keep Baz focused on business too. It’s not an easy task, considering Baz has made no secret of his desire for her. But Tru doesn’t want to get involved with a rock star, even if he is the hottest man she’s ever met.