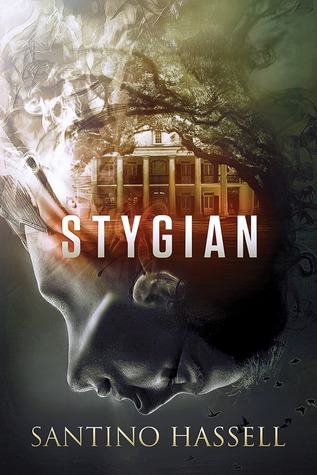 As soon as I heard that Mr. Hassell was writing a story for Halloween, I was extremely eager to see what sort of creation he’d come up with. I simply knew this would be different. That my request to review it was met with a warning that he’d never tried anything like Stygian before was a temptation that I didn’t want to resist. I was absolutely delighted to find that whatever expectations I did have were quickly surpassed, and I fell into the narrative with a greedy focus that led to sleep deprivation, as well as a few less than gracious sentiments regarding any interruptions from the world outside of the story.

Stygian is the story of an up-and-coming band of the same name trying to break through to bigger and better things. Yet, to say that they’re dysfunctional is an understatement. Collectively, the band is carrying around a freight train worth of hurt, guilt, and memories, and the weight of it all is about to tear them apart. Jeremy, the youngest member, is in an especially precarious position, having recently joined the band after the death of their previous drummer. Told from Jeremy’s perspective over the course of a summer “retreat” the guys have embarked on in an attempt to pull things together, Stygian, as it turns out, is far more than just a horror story.

One of the things I loved most about this story is that the characters, along with the experiences that have shaped them to this point, are one-of-a-kind. It isn’t just what’s happened to them all, but how they’ve dealt with the blows. Isolated and “different,” I found Jeremy to be the easiest to become attached to, his role as narrator, notwithstanding. Quince, however, absolutely broke my heart as the story progressed, while Kennedy gradually earned both my respect and admiration. As to the lead singer, Watts…well, he and I never really did get on well, and I say that in appreciation of his complexity and the fact that he left his mark on the narrative as irrevocably as the others.

Even the monsters in Stygian stood apart from others I’ve encountered in my reading. Though they preserve enough expected characteristics to be creepily familiar, Mr. Hassell’s vampires are still atypical and unique, each retaining distinct personalities in spite of what they’ve become. While they are certainly insidious, they are opportunistic, rather than parasitic, in nature, manipulating and amplifying whatever darkness is already present in their prey. Hunter Caroway, in particular, strikes just the right balance between frightening and alluring, and what he seems to offer Jeremy is understandably seductive.

More than the unceasing, nail-biting wariness that kept me raptly turning pages, I was taken with other aspects of the characters’ personalities that allowed the situation to devolve so spectacularly in the first place. Stygian illustrates clearly, and unapologetically, that carelessness can be a very dangerous thing, particularly when it comes to those close to us. Watts repeatedly aims his cruelty, fashioned from the toxic residue of his own self-loathing, at the two members of the band who are the least able to withstand the onslaught. Kennedy’s seeming indifference also contributes to the problem, and both exacerbate the vacuum of loneliness in Jeremy and Quince, making it all too easy for the Caroways to fill it. These, in turn, raise some worthwhile points about survival and fragility, as well as the transference of hurt from one person to another becoming a viable form of abuse in its own right.

Just as an aside, I think this is one of the most gorgeous book covers I’ve ever seen.

Overall, I really loved this book, and I think that, for a first effort in this genre, Stygian is an extremely good one. Nothing is as it seems, and I spent the entire story wide-eyed and nervous in all the good ways there are to be. While all of the characters were exceptionally vivid, I found Jeremy easy to relate to, and becoming lost in the narrative through him was effortless. That the story ends with one of the most temporary feelings of relief I’ve ever experienced, combined with hints that there might be more to come at some point in the future is already a source of twitchy anticipation about what might be next.

Jeremy has been isolated and adrift since the death of his brother. Most people just see him as the skinny emo kid who wears eyeliner and plays drums. No one gets him. Nobody tries. He thought the indie rock band Stygian would become his anchor, but—lost in their own problems—they’re far from the family he sought.

Still, hoping to get close to Kennedy, the band’s enigmatic guitarist, he follows Stygian to northern Louisiana for a summer retreat. They had planned to spend six weeks focusing on new music, but things go awry as soon as they arrive at the long-deserted Caroway mansion. Tempers flare, sexual tension boils over into frustration, and Jeremy turns away from the band to find a friend in his eerily beautiful landlord Hunter Caroway.

Kennedy suspects there’s something off about the creepy mansion and its mysterious owners, but Jeremy thinks he’s finally found somewhere he fits. It isn’t until Kennedy forces the Caroways’ secrets into the light that Jeremy realizes belonging sometimes comes with a price.