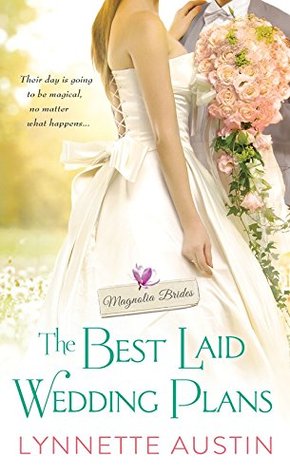 The Best Laid Wedding Plans fell completely flat; I actually felt like I was reading a book placed in the South, but written by someone who had never done more than drive through it or watch a movie about it. The wonderful thing about books placed in the South is that the setting can almost be a character in its own right, especially if the author takes the time to show us around and paint us a picture rather than blandly state things like the rose garden had been over taken by weeds. I want to see the rose garden. I want to smell the roses, the myriad of colors developed after 150 years, smell the variety, see the rich deep reds mingled with the soft yellows and the pinks. But Ms. Austin didn’t do this. She walked us passed the garden and mentioned it had been started before the Civil Wa,r but she never REALLY takes us into the garden. This is supposed to be a setting for weddings, why? What makes it special? Unfortunately, you’ll never know by reading this book.

Another thing that bothered me is that the title of the series, and the wedding business, is Magnolia Brides, yet magnolias are only mentioned twice, and only in passing. Why was this title chosen? What is the significance of Magnolia’s in the South? I grew up there, so I know why this would be a choice for a business name, but many others won’t understand, and I feel like it was a missed opportunity. It was just another example of failing to embrace the opportunity that the setting gives. If you’re going to place a book in the South, embrace the South.

Now I don’t want to come off as a hater, it wasn’t all bad. Despite a SLOW beginning, Jenni Beth and Cole are likable characters who find healing in second chances. Their chemistry is spot on, and the build up well written. I enjoyed the bickering as they both struggled with their issues yet found a way to become vulnerable enough to let each other in and find a way to become whole again. Their dialogue, although lacking the southern dialect I was expecting, was well written and added to the story line.

It was also nice to see Jenni Beth’s relationship with her parents start to heal. But the bad guy was almost like an after thought and only really gets into the mix in a couple spots. I realize the story is about Jenni Beth and Cole, but it would have helped the story arc if the bad guy had been a little more present so we knew who they were coming together to fight.

Overall, the novel had a lot of potential but failed to live up to expectations. I’m hopeful the issues will be fixed in future novels, but only if Ms. Austin embraces her setting better and learns to show not tell us what is going on.

Jenni Beth Beaumont thought she left her broken heart in Chance, Georgia, when she moved away. But when she suddenly inherits her family’s beautiful, antebellum home, her dream of turning the residence into a wedding destination calls her back.

Cole Bryson, an architectural salvager and Jenni Beth’s former flame, intends to purchase and deconstruct the Beaumont family’s down-at-the-heels estate. To his surprise, Jenni Beth is more of a stubborn Southern girl than he thought. Cole will have to use all his sultry, steamy tricks to test more than the resolve of his sexy competition…

One response to “Review: The Best Laid Wedding Plans by Lynnette Austin”