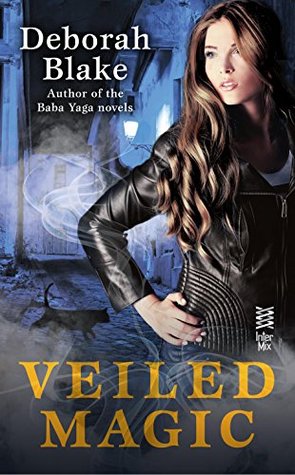 Donata Santori is a classic witch, manifesting her power through ritual, spells, and ceremony.  Her specialty, however, is speaking with the recently departed.  In a modern twist, she works for the police department, interviewing murder victims, in an alternate reality where several supernatural species have been “outed” and are accepted as a common among humanity.

Author Deborah Blake creates several likable characters that surround Donata in Veiled Magic.  I especially liked Peter, an art restorer that becomes deeply involved in the mystery surrounding Donata’s latest case. Chemistry builds between Peter and Donata, but it doesn’t have time to go anywhere while chasing down leads.  Donata also enlists the aid of a former supernatural boyfriend, Magnus, creating what’s supposed to be a love triangle, but doesn’t really feel like one.  It felt more like the threads of something over and done that were still clinging to her as she began to explore something totally new. Magnus is loveable, but I’m team Peter until he proves unworthy.

Blake’s unfolding of this story was, at times, obvious.  That said, it was written in a way that made it feel comfortable rather than boring and still succeeded in hiding the overall storyline. Other than the witch community to which Donata belongs, Blake pulls in some unusual, less utilized paranormal species like shape-shifting bears to make her story fresh.

Because of the way the story resolves, I assume Veiled Magic is an introduction to a series.  If so, I’ll give Blake some slack over the fact that Donata is under-developed.  She begins to exert herself over the course of the book, becoming more of the person she seems to want to be.  She really shines when she stands up to her family without disrespecting them and when she stands up to the governing council of supernatural beings.  No doubt the next book in the series will see her taking on more responsibility and rising to meet the fall-out of what was begun in Veiled Magic.

Since Witches came out of the broom-closet in the early 21st century, they have worked alongside humans as police officers, healers, stock traders, and more. But they aren’t the only paranormal entities in our world…

Police officer and Witch Donata Santori spends her days interrogating dead witnesses by summoning their spectral forms. Normally the job is little more than taking statements and filing reports. But when she’s called in on the case of a murdered art restorer, she finds herself suddenly in possession of a mystical portrait that both the human and paranormal communities would kill to get their hands on.

Unable to take on the forces hunting her alone, Donata seeks help from two unlikely and attractive allies: a reluctant shape-changer and a half-dragon art forger. But as the three of them hurry to uncover the truth about the powerful painting, Donata realizes that she’s caught in the middle of not one but two wars—one for possession of the painting’s secrets and one for possession of her heart…