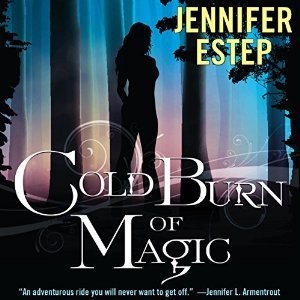 Cold Burn of Magic is the first book in the new young adult urban fantasy Black Blade trilogy by Jennifer Estep. Even though I very rarely read YA, I decided to give this series a chance, since I absolutely love Ms. Estep’s Elemental Assassin series. Overall, I enjoyed listening to Cold Burn of Magic and found this new world both exciting and engrossing.

I will admit that at first I struggled with the book. Being a new series, the author took time to build her world and introduce the characters, which I found strikingly similar to the Elemental Assassins world. Our main character, Lila, is a younger version of Gin. Her world is filled of warring mobster Families, and Gin’s world has fighting mob bosses. Other similarities include some folks having magical Talents/powers, a rare metal used to make weapons, runes/images that represent the different alliances, and, by the way, Lila is an orphan like Gin. At first, I found the resemblances a little disconcerting, but I was willing to wait patiently for the book to take on its own life. And once that story started, it was an amazing ride right up to the very end!

The story centers around attacks on Devon Sinclair, the second in command of one of the powerful Families. Lila is forced into protecting Devon and partnering with the Sinclairs to help figure out who the Mystery Man is behind the attacks. I enjoyed watching Lila piece together the puzzle successfully (even though I figured it out before she did!)

While the story itself is entertaining, it’s the wonderful characters that bring the book to life. Lila may be a loner thief at the start of the story, but over the course of the book, we are introduced to an amazing cast of characters that I guarantee will become Lila’s closest friends and family before the end of the trilogy. Of course, there are sparks between Lila and Devon, a dangerous attraction given she’s his bodyguard and all. I admire how this is handled by both characters – well, mostly Lila since we share her POV and understand why she does what she does. Oscar is one of my favorites – a house pixie assigned to help Lila, one who does so reluctantly. He reminds me of Owen Wilson’s miniature cowboy character from the movie Night at the Museum. The entire cast of characters, from the evil to the good, is well-developed and fascinating.

Brittany Presley does a wonderful job capturing the youth and intelligence of Lila, along with her slightly southern accent. I also enjoyed her performances of the other characters – Mo is a great combo of kitschy and concern. Devon has the gravel of a young man not yet dragged down by age. Felix’s voice is perky and fun, just like his character. Overall, Ms. Presley’s performance is spot on.

In the end, I really enjoyed this first story in Lila Merriweather’s adventures. Once I made it past the overt world building, I was able to fully immerse myself into the story. The mystery of who was trying to kidnap/kill Devon was engrossing, and I loved trying to solve the crime along side Lila. Ms. Estep does a great job developing Lila as a late teen who has been hardened by life, yet still innocent when it comes to certain experiences, like falling in love. Lila isn’t an angsty young adult, nor is she mature beyond her years. She’s the perfect mix of smarts and youth, making her a character that someone of all ages can relate to. Cold Burn of Magic is an excellent start to a series I know that will end up on my re-listen list: great characters and engrossing plot with mystery and action. I’m looking forward to see what happens next.

8 responses to “Listen Up! #Audiobook Review: Cold Burn of Magic by Jennifer Estep”