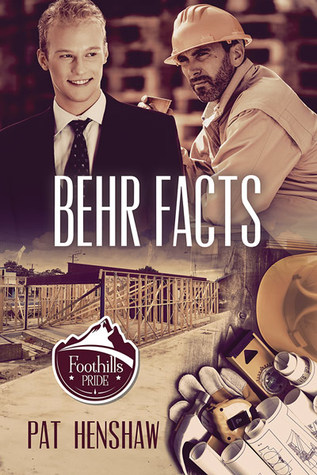 Abraham “Abe” Behr is the head of his family’s business, Behr Construction. The company is losing money, and it appears it may be the sabotage of disgruntled family members. Abe brings in outsider Jeffrey Mason, CPA, to help with the books and figure out what’s going on with the finances. While Jeff may not know about it, there is bad blood between the Behrs and Masons, making it more difficult for some in the Behr family to accept Jeff’s work. As the pair work together to solve the mystery, they realize that they are becoming more than friends.

Behr Facts is the love story of an unlikely pair, making it despite their own hang ups. It’s an enjoyable novella with likable characters. And while not completely original, it’s still a good story. I have not read the previous books in the series, and while loosely connected, they are standalone in nature.

The story is shared in the first person POV of Abe, which was a bit off-putting at first, since most romances are usually told in third person POV. I stumbled around the dialogue for a bit until I got used to it. And while it seemed pretty obvious to me as to what was going on at Behr, apparently it took Jeff and Abe several weeks. This seemed a bit unrealistic to me, as who would allow losses like Behr was experiencing for weeks before making a move to stop it?

One thing that bothered me a bit was that the author tries to address bigotry and hate in this short story, but it felt forced and used stereotypes rather than integrating actions and reactions in a more original way. The whole story has a cookie cutter feel: not bad but not unique.

In the end, Behr Facts turned out to be more about a man discovering who he is and what he wants out of life rather than an engrossing romance. Abe was always doing what was expect of him by others and never anything for himself. His journey is all about self-discovery and finding true happiness. It’s a feel good, everything-turns-out-great kind of story, which isn’t necessarily a bad thing. While the story didn’t stand out, it still was enjoyable.

Big, burly CEO Abe Behr is dismayed to discover someone—possibly a family member—is stealing from Behr Construction, which primarily employs Behr relatives. Abe takes the unprecedented step of hiring an outsider, likeable CPA Jeff Mason, to go over the books and help find the culprit. They are drawn to each other as they talk to workers, including Abe’s two younger brothers and their shifty cousin.

Since he has sacrificed romance all his life to build the business, Abe’s surprised by his feelings for the handsome Jeff. He’s even more shocked when they are confronted by bigotry in the Sierra Nevada foothills community, which is being inundated by gays moving from the San Francisco area. As he and Jeff get closer, Abe must come to grips with coming out to a family and community that aren’t very tolerant. Fortunately, being the head Behr helps him find his footing and grab onto love when it bites him.