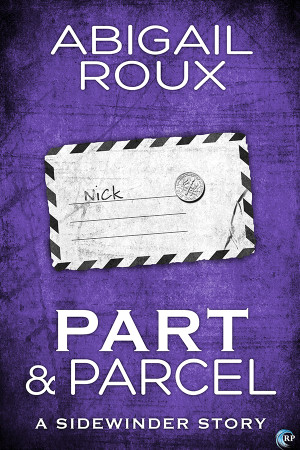 After months of concern over so many beloved characters, and successfully avoiding all of the spoilers I possibly could, I was very pleased to discover that Part & Parcel ended up being even more wonderful than I had anticipated. Nick O’Flaherty and Kelly Abbott have been favorites of mine for ages, and the introduction of the Sidewinder stories helped ease the distress that accompanied the ending of the Cut & Run series, which I have always loved tremendously. Kelly and Nick are absolutely perfect for each other, and, while I’ve always wanted them to be happy, there was never any doubt that their path would be a difficult one.

Though it is told primarily from Nick and Kelly’s perspectives, Part & Parcel is inarguably an ensemble effort. All of the surviving members of Sidewinder (and Zane) share a good amount of screen time once their (literal) journey begins—a facet of the novel that was welcome after having just said goodbye to them after Crash & Burn earlier this year. Zane, in particular, even shares narrating duties, which proved to be a very effective way of making me feel like a participant in the narrative, not merely an observer.

One of the things that makes Part & Parcel unique is the combination of flashbacks and shifting narrators, along with the humor and answering sweetness and melancholy inspired by Elias Sanchez’s missives, that make up the entirety of the story. The team’s memories and Eli’s own words comfortably fade back and forth from one to the other, effectively transforming the ghost of a man who’s haunted these characters since Cut & Run into a real person within Part & Parcel’s pages. The result is that the audience is able to get to know Elias Sanchez over the course of the team’s journey, just as Zane, who is the “outsider” of the group, does.

Ms. Roux is notorious for torturing her characters, and she does an especially thorough job of it in Part & Parcel. Nick and Kelly have been together long enough at this point that the issues they haven’t dealt with yet become a serious problem over the course of the story. Every single one of these men have a lot of lingering darkness from their time in service, as well as many events that followed, but poor Nick is positively drowning in it. On the surface, he and Kelly are an extraordinary couple. But, the pain they carry with them broke my heart more than once.

Overall, I found Part & Parcel to be a very welcome addition to both the Cut & Run and Sidewinder series. I was particularly glad to finally “meet” Elias Sanchez, knowing how much his friendship and death impacted the other members of Team Sidewinder. Ms. Roux has never shied away from the darker side of life, or romance, for that matter, a facet of her writing that I’ve always appreciated. Along with the recurring themes of sacrifice and love, Part & Parcel also deals with plenty of other important ideas, such as the fact that denial and closure are not reciprocal concepts and that it’s okay not to be okay all the time, something we all might need to consider occasionally. This story was another tough one to get through, but, as a long-term fan of both series, I can’t recommend it highly enough.

Nick O’Flaherty and Kelly Abbott had their happy ending in sight when a friend’s call for help almost ended with them losing it to the blade of a knife. Now, in the aftermath of near-disaster, both men are trying to heal and move on.

Moving on together, though, is harder than either of them realized it would be. Kelly struggles with simply being a lover instead of the Doc, while Nick is mired in his recovery. The distance between them inches along in stilted silence.

Desperately seeking solace, Nick finally gathers the courage to sort through the possessions his dear friend and fellow Sidewinder teammate Elias Sanchez left him when he died. Instead of comforting memories, Nick and Kelly find a stack of letters and strict instructions from Eli that prompt them to send out a call for assistance. With Eli’s letters in hand, Sidewinder sets out on one last mission together, seeking peace and absolution from beyond the grave—and from each other.

Abigail Roux was born and raised in North Carolina. A past volleyball star who specializes in sarcasm and painful historical accuracy, she currently spends her time coaching high school volleyball and investigating the mysteries of single motherhood. Any spare time is spent living and dying with every Atlanta Braves and Carolina Panthers game of the year.

Abigail has a daughter, Little Roux, who is the light of her life, a boxer, four rescued cats who play an ongoing live-action variation of Call of Duty throughout the house, a certifiable extended family down the road, and a cast of thousands in her head.

To celebrate the release of Part & Parcel, Riptide Publishing is selecting TWO giveaway winners! One will receive the last four Cut & Run books in audio, and the other will receive the full Sidewinder series in audio. Your first comment at each stop on this tour enters you in the drawing. Entries close at midnight, Eastern time, on December 26, 2015. Contest is NOT restricted to U.S. Entries. Follow the tour for more opportunities to enter the giveaway, and don’t forget to leave your email or method of contact so Riptide can reach you if you win! Contest sponsored by Riptide Publishing; the blog and its owner are not responsible for winner selection or prize distribution.