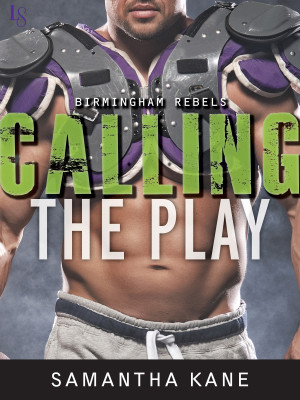 Tyler Oakes knows he’s on his last chance to make it as a pro quarterback, so he’s toned down his partying and is trying to focus on playing the game. But sometimes he needs to scratch an itch, and it doesn’t matter to him if companionship comes from males, females, or both at the same time. But when he meets undercover cop Randi McInish, he knows he wants more than just one night with this foul-mouthed sex pot. And then there is the Rebels’ new quarterback coach, Brian Mason, who shares a history with Tyler. When it’s clear that the two men have unspoken issues to resolve, can Randi step aside and let them discover love?

Despite struggling with some issues while reading the first book in the series, I decided to give Calling the Play a shot. Unfortunately, after only hitting the 10% mark, I had to stop reading for two reasons. First – it was pretty obvious that this story was once again going to include a romance between a player and a coach. I had issues with how this was handled in the first book, and I was already cringing at the replay of this dynamic. Second – I couldn’t stand the heroine. She was simply obnoxious. I admire women who are all about “this is who I am and this is what you get,” but it was over the top. Her vocabulary pretty much only consisted of multiple 4-letter words strung together. I don’t mind a potty-mouth, but there is a time and place, and this felt forced.

However, after taking a break from the book for a few weeks, I decided to pick it up again, and I’m happy to report, ended up enjoy it – more so than the first book. While I still had some issues with the book and the characters, overall, I liked the story and romance of Tyler, Randi, and Brian. While Randi still bugged me from time to time, I liked that she was protective of Ty, and eventually Brian. Additionally, as the story progressed, her level of unpleasantness toned down considerably. Meanwhile, the coach-player issue didn’t play out as it did in the first book, and I found I wasn’t irritated by the Brian-Tyler dynamic because 1) they have a history and 2) it’s still preseason and they aren’t in a player-coach situation yet.

I liked that Calling the Play focused more on the romance between the three main characters rather than the external factors of the football team, giving the book more heart and creating a stronger connection than I had while reading Broken Play. And while there were still some crazy events, like Brian and Tyler having sex in a windowed office where anyone could see them, which frustrated me, overall, the author provided time for the characters to adjust and talk things out as the relationship developed (although the timing of some of the more meaningful discussions was awkward!). Additionally, I am glad the author had the team address the whole sleeping with a coach thing. It’s not realistic, but at least it was done and works in the world where there is an expansion team in Alabama!

Quarterback Tyler Oakes plays hard and parties even harder. That reckless lifestyle nearly derailed his career, and now the Birmingham Rebels are Ty’s last shot at football immortality. But staying out of trouble can take its toll—especially for a man with a taste for girls and guys. Because curvy, gorgeous Randi McInish is just the kind of trouble he’d like to get into.

A tough-as-nails undercover cop, Randi meets her match in Ty. After they get wrapped up together in a drug bust and a high-speed car chase, Randi’s eager to take the notorious bad boy for another wild ride. Turns out Ty already has something in mind. When he introduces her to the Rebels’ sexy new quarterback coach, things start heating up a little too fast for Randi.

Brian Mason coached Ty in college, and boy do they have history together. With Brian taking control on the field and in the bedroom, they were an unstoppable team. But Brian, blindsided by love, ran from his feelings for Ty. He won’t let Randi make the same mistake. Both men agree they need more than each other. They want a woman they can share. And when they make a pleasure play for Randi, all three are sure to score.