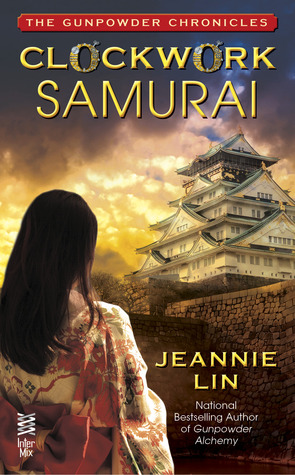 I have waited for the sequel to Gunpowder Alchemy, the novel ended with so many questions.  Suffice to say, Clockwork Samurai does not disappoint, though I will say the plot thickens.

At the conclusion of the previous novel I was left with a few questions.  What will happen between Chang-wei and Jin?  Will they be able to quell the rebels?  Will they be able to stop the British invasion?  Though none of these issues are resolved, each plot thread does progress.  The plight of Jin’s country is gripping – made more so by the issue of a source of opium that is deadly upon first use.  However it seems to not be of a concern of the powers that be – especially as Jin discovers that the Emperor is indulging in it.

Jin has been promoted to a palace physician.  Though it seems like a noble post, one that allows her to give her mother and brother a better life, it is not without disadvantages. Though she is the physician in charge of the Emperor’s concubines, there still seems to be political minefields in this position.  Not to mention working in the palace means she could catch the Emperor’s eye, something Jin does not desire.  Due to fears that the Emperor is intrigued by Jin, she asks for a reassignment.  However, be careful what you ask for, her reassignment puts her back in a new adventure with Chang-wei – one that they may not return from.  The journey to Japan in hopes to make an alliance was a nail-biting journey.  The depiction of the county, the culture, and the introduction of new characters was enchanting.  Though it doesn’t go smoothly, it was a fascinating journey.

I enjoyed the continuing romance of Chang-wei and Jin.  Though it is obvious they desire each other, something holds Chang-wei back.  Though it is not entirely clear to Jin, she can tell that they have a strong connection and desire for each other.  Yet, because of their positions and the turmoil, they seem unable to explore it.  This romance is well woven into the rest of the story and the balance continues to be well done.  I hope that they will find a way to be with each other.  It seems that they are well suited.

The journey to Japan was utterly fascinating.  Though nothing seems to go as planned (or more so, as hoped), it was a thrilling and exhilarating adventure.  Upon the conclusion of the novel, I was left with more questions and wonderings.  However, I do not want to spoil anyone as the questions would do.  Suffice to say, I eagerly look forward to more in this beautifully written, gripping and fascinating world.

As a physician, Jin Soling can see that the Emperor is cracking, relying on Opium to drown his troubles. The Ch’ing Empire is failing, and war with the British is imminent, but the man to whom Soling was once engaged has a bold idea to save it.

A leader within the Ministry of Engineering, Chang-wei suggests an alliance with Japan, whose scientists claim to have technical advancements that could turn the tide of the war. But Japan has kept itself in isolation for the last two hundred years, cutting all diplomatic ties with the Ch’ing Empire. Chang-wei must enter the island nation in disguise to seek an alliance—an alliance forbidden by the Japanese shogunate.

Seeking to escape the politics of the imperial court, Soling arranges her own passage on the airship to Japan. But once they land, Chang-wei and Soling become targets of the shogunate’s armored assassins. Caught between two empires, in a land distrustful of foreigners, the deadly war machines are the least of their worries…