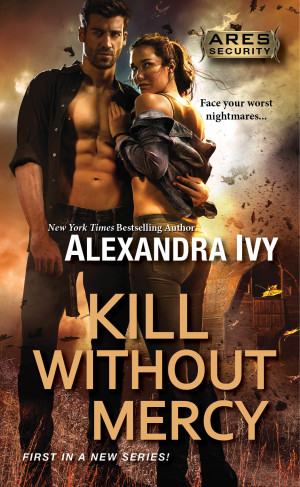 Rafe Vargas and four close friends were prisoners and survivors of war. Two years after returning to the U.S., the group decides to start ARES Security in Texas. With the firm on the brink of opening, Rafe is called away to deal with his deceased grandfather’s estate in the middle of nowhere, Iowa.

Annie White had a new job at a prestigious accounting firm, but after six months, she quit. She’s the daughter and only survivor of the Newton Slayer, a mass murderer known for killing women when Annie was a young girl. Annie claims to have had visions of the murders AS THEY HAPPENED … and two nights ago, those visions returned. Now she’s decided to go back to Newton, Iowa, where it all happened, to find out what is going on and why the visions have returned.

Kill Without Mercy is the exciting first book in a new romantic suspense series by Alexandra Ivy. The book is engaging right from the get go, and I had a tough time putting it down. At only one chapter into the book, the author had already pulled out not one, but two mysteries, plus some family drama, without making it overwhelming. The world building was accomplished over the course of the book, mainly through the interactions and dialogue between Rafe and his companions, weaving seamlessly into the storytelling.

When Rafe spots Annie at a local diner, he’s instantly attracted to her like no other. So when he sees that she’s clearly rattled, Rafe jumps in to help Annie out. And when he discovers the dangers that surround Annie, his inner-hero rises up, and he feels the need to protect her. Rafe calls in his buddies to help get to the bottom of the murders.

I completely appreciated that Ms. Ivy wove so much world-building and hints about the other characters into this first book. She didn’t just introduce them and then have them in the background. Rafe and his counterparts are more than a team-they are a family; therefore important to the overall story and series.

The story behind the mystery was gripping, and I was wrapped up trying to solve it along side the characters. The thing was, I got so caught up in the mystery, and it was a gruesome one at that, that the romance felt out of place. I just didn’t feel sparks. It’s not that the author did a bad job, but rather, I was more interested in keeping the characters safe and finding out who was behind the murders, than taking time for Rafe and Annie to connect. But really, it didn’t bother me, because I was so caught up in the Newton Slayer storyline and the side stories with the other characters. So if I pull this one apart, the romantic story line was pretty slim and not very engaging, while the suspense was really well done. The book was entertaining, and that’s what matters. Plus, I’m totally hooked on the series based on the bits and pieces about the other characters that the author sprinkled here and there throughout the book.

Overall, I enjoyed Kill Without Mercy, and the suspense storyline was both gripping and engaging. I liked the twists and enjoyed how much of it I was able to figure out – not because it was obvious, but because it was a good mystery, and I loved trying to put the pieces together. With as much as I liked the action and suspense, I found the romance a bit flat and not very engaging. It’s not that they were a bad couple, but I just didn’t care about their love story as much as I cared about discovering what was going on. So in the end, while I didn’t find sparks in the romantic side of the book, the total package is an entertaining story.

From the hellhole of a Taliban prison to sweet freedom, five brave military heroes have made it home—and they’re ready to take on the civilian missions no one else can. Individually they’re intimidating. Together they’re invincible. They’re the men of ARES Security.

Rafe Vargas is only in Newton, Iowa, to clear out his late grandfather’s small house. As the covert ops specialist for ARES Security, he’s eager to get back to his new life in Texas. But when he crosses paths with Annie White, a haunted beauty with skeletons in her closet, he can’t just walk away—not when she’s clearly in danger…

There’s a mysterious serial killer on the loose with a link to Annie’s dark past. And the closer he gets, the deeper Rafe’s instinct to protect kicks in. But even with his considerable skill, Annie’s courage, and his ARES buddies behind him, the slaying won’t stop. Now it’s only a matter of time before Annie’s next—unless they can unravel a history of deadly lies that won’t be buried.

15 responses to “Review: Kill Without Mercy by Alexandra Ivy”