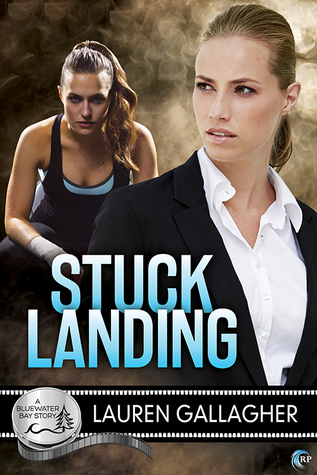 After the long, painful dissolution of her previous relationship, Anna Maxwell isn’t in a hurry to jump into any new attachments, much less with anyone involved with Wolf’s Landing. But, when the tough, gorgeous stunt coordinator Anna has had a crush on for months suddenly breaks up with her boyfriend and makes it clear that she’s more than willing to help work off their mutual frustrations in bed, Anna sees no reason not to take her up on the offer. Even though Anna’s determined not to fall for a bisexual woman again, Natalya Izmaylova seems to be everything Anna has ever wanted in a partner. And while walking away should be easy, Anna is quickly learning that it most certainly is not.

Told exclusively from Anna’s perspective, Stuck Landing follows the developing relationship between two wonderfully tenacious, extremely capable women who are perfect together—if they don’t self-destruct along the way. One thing I was especially pleased about is that both women are so open about what they want sexually. Anna and Natalya like and want sex, and it was nice to see that out there so matter-of-factly. Regardless, the chemistry between them is so obvious and undeniable that every scene they have together practically vibrates with it, whether they’re having sex or not.

I was glad, but not at all surprised, to see biphobia addressed so unapologetically in the Bluewater Bay series, and by this author, in particular. As has been the case with just about every other story I’ve read in this collection, the stumbling blocks Natalya and Anna face seemed real, and were far from easily overcome. Biphobia is a serious problem that doesn’t get enough attention in literature, in my opinion, but Ms. Gallagher dissects the issue both thoughtfully as well as candidly, and I appreciated both very much.

Once again, the Bluewater Bay series has proven that beautifully written, thought-provoking fiction is alive and well. Stuck Landing is frank and occasionally harsh, yet manages to be evocative and incredibly sweet in places, too. Ms. Gallagher has repeatedly demonstrated that she is an impressive storyteller, and makes quite a few good points here in a relatively short narrative. Although it can be read as a standalone, I recommend reading all of the Bluewater Bay stories, since each is unique, yet often interconnected. The entire series has a lot to offer, and is one I’ll be following until the end.

For months, acclaimed Wolf’s Landing director/producer Anna Maxwell has been nursing a crush on Natalya Izmaylova, a former Russian gymnast and current Wolf’s Landing stunt coordinator. When Anna witnesses Natalya’s very public breakup with her boyfriend, she can’t resist inviting her over for drinks to commiserate about love and all that nonsense. Commiseration doesn’t last long, and soon Anna’s in bed with the hottest woman she’s ever touched, living out fantasies she didn’t even know she had.

Despite the amazing sex, Anna wants to proceed with caution. They’re both newly single. They’re colleagues. And there’s the not-so-small matter of Anna’s biphobia.

Natalya won’t commit to someone who clings to ridiculous stereotypes, but they can’t avoid each other at work, and there’s no ignoring their chemistry. Anna’s defenses are slowly eroding, and Natalya is willing to give her another chance. But Natalya only has so much patience, and even scorching-hot sex won’t keep her coming back forever. If Anna doesn’t come to her senses soon and let go of her prejudices—not to mention her insecurities—she’s going to lose the woman of her dreams.