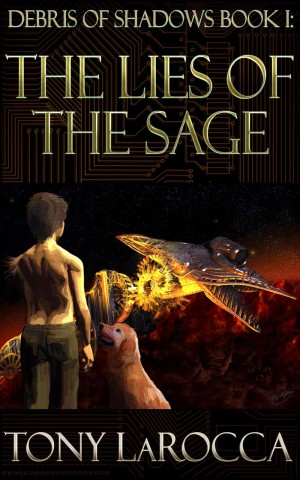 Benjamin gave the girl on the operating table a reassuring smile as Rivers pasted electrodes to her forehead. Her thick, auburn hair spilled from underneath her blue, elastic cap. Command had chided him for allowing the second–gens to call him Uncle, but the poor kid was ten, barely a year older than Alyanna. What if that was her, laying there?

“Do I have to get operated on?”

“Do you mean, ‘Do I have to go through with this operation?’”

She rolled her chocolate eyes. “Yes,” she said in a singsong voice.

Benjamin chuckled. He tucked her hair back into its restrainer, and caressed her cheek. She scrunched her face, the golden lights in her irises flickering. “Don’t you want to be a mother someday?” he asked.

She reached up. He thought she was going to swat his hand away, but she grabbed it instead. Her slender fingers squeezed his, and he felt a slight electric tingle, even through his latex gloves.

“Uncle Benjy,” she said, “what happened to Zeta?”

Benjamin sucked in air between his teeth. He had sworn never to lie outright to the subjects. A promise you only keep when it’s easy is worthless, he thought. He glanced at Rivers, the lieutenant’s eyes locking with his. He opened his mouth to answer, when the door of the surgery opened.

An orange glow blanketed the operating room, like the final rays of the setting sun. General Jaeger stepped inside, his distended rictus thankfully covered by a paper mask. The girl whipped her hand away from Benjamin’s, and shot it to her hip in a fist. She straightened her spine, as if standing at attention in bed.

The general strode to her side. He tilted his head towards her, bathing her in his golden light. “Sister,” he said, his bass voice conversational, “is there a problem?”

“At ease,” Jaeger said. His hairless brow furrowed, as if he smelled something disgusting. “Are you frightened?”

“Of course not,” said Jaeger. “What you’re doing is an honor reserved only for the strongest of us. Is that you? Are you the strongest?”

The general patted her shoulder with a glowing hand. “Prove it to me, then.”

Benjamin watched as her cybernetic irises swiveled and contracted. He felt a bite of irritation that the Cylebs were probably communicating in their own, silent way. Another tap of the general’s chisel.

“I’m going to have to ask you to leave, General,” he said. “These instruments are very delicate and unshielded.”

Jaeger’s luminescent fingers contracted on the girl’s shoulder. He nodded at her, turned, and left, without giving Benjamin or Rivers a glance.

Benjamin snorted. “There was a time when that walking electromagnetic pulse called me Sir,” he said underneath his breath. Rivers laughed, but it was more nervous release than jocularity. Benjamin winked at his patient. “Okay, hon,” he said, “we’re going to start the anesthesia in a minute. Don’t worry, you’ll be fine.”

“Of course I’ll be fine,” she said, her voice thick in the back of her throat. The golden fibers in her eyes flared beneath a glistening sheen. She blinked the moisture away. “Stop talking to me like a ’pure. I’m strong. I am strong. I—”

Benjamin jolted awake. He blinked away the last vestiges of the dream. “More ghosts,” he muttered.