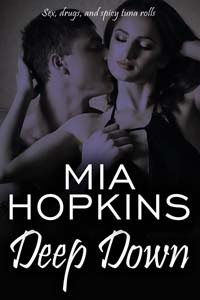 Using a tap on the dock, Sam filled a clean bucket with water. He grabbed his openers and shoved the pointed end of the tool into the keyhole opening on the underside of one of the urchins.

Sam’s hands were big and strong looking, with long fingers and neat, squared-off tips. The backs of his hands were rough and peppered with scars. His movements were deliberate and exacting―almost like a chef’s.

He split the shell, pulled the bright yellow roe, and dumped the spiny shells into the marina. After rinsing a lobe of delicate roe in the clear water, he held it up for her to taste.

Instead of taking the uni from his hand, Eve lowered her lips to his cold fingers and sucked it up.

For a split second, the rough edge of his thumb brushed against the tip of her tongue. At once, desire surged through her, pounding through her bloodstream like a drug. She almost didn’t notice that he was staring at her as she ate, heat flooding his eyes.

He shifted his stance. “I’ve heard that some Japanese people believe uni has aphrodisiac qualities.”

Instead of answering, Eve leaned forward and touched his arm where his tattoo peeked out from under the sleeve of his T-shirt.

Sam took a step forward and rested his hands on her hips. He pulled her against him as he leaned back against the closed door of the wheelhouse. She ran her palms against his chest, solid as a rock wall through the thin cotton of his T-shirt.

She ran her fingers through his hair; soft and thick and wavy, it contrasted with the hard edges of his unshaven jaw, the cleft in his chin, and his cheekbones.

“I want you, Eve,” he whispered. She shivered when his hot, full lips found her neck, covering her skin with openmouthed kisses that burned like a brand. 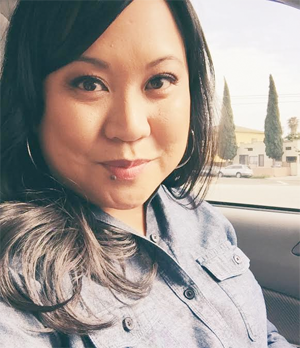 Mia Hopkins writes lush romances starring fun, sexy characters who love to get down and dirty. She’s a sucker for working class heroes, brainy heroines and wisecracking best friends. When she’s not lost in a story, Mia spends her time cooking, gardening, traveling, volunteering and looking for her keys. In a past life, she was a classroom teacher and still has a pretty good “teacher voice” and “teacher stare.” She lives in the heart of Los Angeles with her roguish husband and two waggish dogs. For more books, freebies and fun stuff, please visit her website at www.miahopkinsauthor.com or connect with her on Twitter @miahopkinsxoxo.