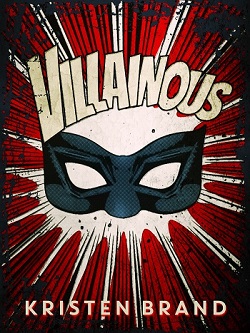 “Valentina,” he greeted before I could announce myself. “How about that drink I owe you?”

A waitress appeared to take my order the instant I sat down, either knowing the city’s crime lord was sitting at her table or identifying the handsome, well-dressed man as a good tipper. Jean-Baptiste was having a Rhum Barbancourt on the rocks, unless I missed my guess. I nearly ordered the same but then changed my mind.

“I’ll have a Black Valentine,” I said.

Yes, I have a drink named after me. That’s how you know you’ve risen above the ranks of normal villainy. I mean, do Madame Guillotine or Dr. Grim have cocktails named after them? Well, all right, if you scoured the Internet, you could probably find a recipe for something, but good luck ordering one, because the bartender would have never heard of it. Black Valentines had risen in popularity about fifteen years ago to become a bar standard, and they’d probably stay there long after memory of my heists and murders had faded. Funny how my most lasting contribution to history will be a drink.

Once the waitress left, I said, “I sound like a total asshole when I order that, don’t I?”

Jean-Baptiste smiled. “I wasn’t going to say anything.”

Settling in, I spotted the biggest threat to myself if Jean-Baptiste decided to take offense at my involvement with the DSA. The statuesque, dark-skinned woman sitting two tables over was Amala Kapoor, aka Ember, Jean-Baptiste’s bodyguard and main muscle. Her black leggings and orange tank top made her look like any other single woman out on the town, but her boots gave her away. Ankle-high, thick-soled, and clasped with no less than five metal buckles, they were serious ass-kicking boots. I used to own a few pairs like them myself.

Jean-Baptiste set down his glass and shifted so that he was facing me directly. “I wasn’t expecting to hear from you again so soon.”

“I couldn’t help myself. I heard the most fascinating rumor about you.”

“Oh? I hope it’s not the one where I’m helping the Illuminati give people special abilities by drugging the water. I can’t say I care for that one.”

“That’s hilarious, but no, not that one. It is drug-related, though.”

Jean-Baptiste didn’t stiffen or twitch or give any sign of surprise. He was still and silent—perhaps a little too much so.

I leaned forward across the small table and lowered my voice. “It’s about psyc. Clever little drug, isn’t it? Giving normal people telepathy. I hear you’re the one who’s importing most of it.”

I smiled, knowing that even though he couldn’t see it, he could hear it in my voice. “I want in.”

The waitress reappeared with my drink, and I paused to thank her and take a sip. Good. The bartender hadn’t skimped and used a cheap brand of black vodka. That always ruined it.

Telepathically, where the eavesdropping DSA agents had no chance of hearing, I said, The DSA are on to you. They made a deal with me to bring in enough evidence to take you down.

“I thought you were retired,” Jean-Baptiste said aloud. “Why dive into the drug trade now?” In his head, he asked, Why are you telling me this?

“I’m bored,” I said. “Retirement isn’t making me relaxed so much as restless. I’m not looking to don my old costume and take over a city, but a little side operation sounds right up my alley.” Do you think I’d sell you out to the DSA after all we’ve been through together? Wait, no, don’t answer that. Just know that I have no intention of cooperating with them completely.

“And what do you have to offer me?” This time his thoughts matched his words.

“Darling, what can’t I offer you?” I have to give the DSA something, which means you’ll need to give up some inventory and a few underlings to throw them off your trail. You hide the real route of the drugs, I get credit for the bust, and the DSA feels like they accomplished something. Everybody wins. “Are you saying you don’t have a use for someone who can control people’s minds and read their thoughts?”

The overhead lights dimmed, and on the other side of the restaurant, the wait staff started singing Happy Birthday to an embarrassed diner. Jean-Baptiste finished off his rum, his Adam’s apple bobbing as he took his last swig. I merely ran my fingers along my glass, feeling the cool condensation as I searched his face for some sign of his thoughts. A decade or so ago, I’d have been able to read his mind with no problem, but these days, he was much better at blocking me out.

“I’m not opposed to the idea of working with you again,” he said, as the upbeat but off-key song continued in the background. “Quite the contrary. But I need time to consider.”

An answer to both my fake offer and my real one.

“Amala!” he shouted, and dove to the floor.

I didn’t pause to question. I didn’t even take time to wonder what his reason might have been. I just dove to the floor after him. An instant later, gunshots slammed into the wooden wall behind us. The Happy Birthday song broke off with screams, and one of the undercover DSA agents shouted, “Drop your weapon!” I moved to see who was responsible, but then the barrel of a gun hit my side.

“What are you trying to do?” Jean-Baptiste snarled. If he pulled the trigger now, I’d get a bullet through several important internal organs.

“You can’t think I’m behind this,” I said, though considering I’d invited him here, he really could.

“I’m not sure what disappoints me more,” he said, “That you’d try to kill me after all our history, or that you’d be so sloppy about it.”