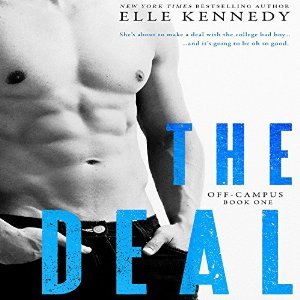 The Off-Campus series focuses on undergrad students of the fictional Briar college, located outside Boston, MA. In The Deal, the first book of the series, music major, Hannah Wells successfully passed her ethics midterm, where as most of the class failed, including hockey captain Garrett Graham who needs to pass the makeup exam to remain eligible to play. When Garrett realizes he could pass with Hannah as his tutor, he stops at nothing to secure her help, and in the process, the pair become friends. However, as Garrett helps Hannah catch the eye of another, he realizes he wants to keep her for himself.

Starting as a classic opposites attract trope, The Deal blends sharp wit with thoughtful plot development to create a wonderful romance. Hannah and Garett have amazing chemistry, but their story doesn’t follow the strict “I hate you therefore I love you” theme. Rather, the pair slowly lets down their guards around the other and become honest friends. I adore witnessing the progression from acquaintances to friends to more. The pair slowly grew closer until they didn’t realize how deep they were into it. As they shared their most inner-most secrets, I found the story utterly touching and gripping. I couldn’t stop listening.

As great as the romance is, the story is successful because of the well-developed characters. Hannah and Garrett both have pasts that lend them to bond and become the perfect couple. Hannah was raped five years ago. Garrett lived with an abusive father. Both have done what was necessary to move forward. While in general, the couple is mature beyond their years, it fits because both Garrett and Hannah have had to endure awful experiences, and they have had time to heal and move past it. This gives their level of maturity credibility.

Garrett and Hannah are really too perfect to be true, but they are sooooo good together that I just want more and more of the couple. Their love is intense and beautiful, but it didn’t come easy. They worked at it and came by love after getting to know one another and growing into a relationship. I would love a story about the pair down the road 5 years to see how they adjust to life outside college.

The Deal is told in alternating first person, present tense POVs. It is very different than what I’m used to, but the narrator does a nice job of modulating her tone to give each character a unique and appropriate voice. While it’s not a narrative voice I’m used to, it fits the age of the characters. Although the book is set on a college campus and it’s about characters half my age, it is relatable and genuine. And while not always a fan of the dueling first person POVs, it works, especially because the of the narrator. The present tense actually lends itself to the college-aged characters. I’m impressed. This story wouldn’t have worked outside the college setting. It’s perfectly done.

Ms. Avalon’s narration suits both the age and personalities of each character, giving each a unique and fitting voice. I loved that she used different voices with each character, even maintaining the changes while narrating. Since the story is shared in first person, alternating between Garett and Hannah, this meant that half the time I was listening to Garett, and the other half to Hannah. I applaud her consistency and talent!

In the end, The Deal by Elle Kennedy and narrated by Lorelei Avalon, is an absolute treat. Ms. Kennedy tackles very serious issues in an honest and respectful manner without weighing down the story. The characters are real and relatable, bringing the story to life and keeping me engrossed in their journey. Ms. Avalon nails her interpretation of each character, bringing out their youth and experience. And the icing on the cake is the well-timed pop culture references and laugh-out-loud humor. I cannot wait to listen to the next story in the series.

WARNING – the last 30 minutes of the audiobook is a sample from the next book, The Mistake.

Non-Audiobook Reviews in the Series:

6 responses to “Listen Up! #Audiobook Review: The Deal by Elle Kennedy”