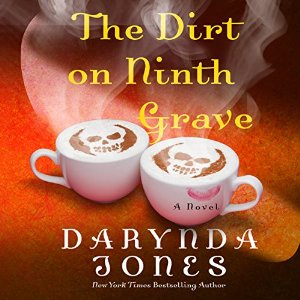 It’s been a month since Janey (aka Charley) showed up in Sleepy Hollow, New York, without any memories of her past. Taken in by the owner of a local restaurant, she is making friends and learning that she’s a bit unique – like the fact that she can see dead people and their parallel dimension. With each day that goes by, Janey gets more and more frustrated, especially when she thinks that those around her may hold the keys to her past.

If you have followed my reviews of the Charley Davidson series, you will know that I have a bit of a love-hate affair with the series. While I was pleased with most of the previous book, the ending, leaving Charley with amnesia in a far away town, set up The Dirt on Ninth Grave as a bit of a make or break book for me. Well, I am very happy to report that this book won back my love for all things Charley. Seriously… it’s that good. If you have been on the fence, I strong urge you to pick up the book and give it a chance.

I was worried about the whole amnesia aspect, but Ms. Jones uses it as a positive tool, rather than allowing it to further isolate Charley. Although she doesn’t know it, Charley is surrounded by everyone that loves her. Cookie is once again her best friend, and she has the hots for Reyes, knowing she loves him. But since she’s not weighed down by all of the revelations uncovered in the past few books, Charley is able to just be that carefree, funny woman we first met. She has all of the good traits that caused me to fall for her, leaving out the ones I couldn’t stand. And I fell in love with Reyes all over again. Seriously. I swooned. He has to act like he doesn’t know Janey – the love of his life. It pained me to see his struggles, along with all of Charley’s family, as they deal with Charley’s memory loss.

And the humor is out of this world funny. I cannot tell you how many times I literally laughed out loud. Some of the humor is trademark Charley Davidson/Darydna Jones, while some of it is Charley making fun of Charley. I freakin’ loved it. But the book isn’t all laughs. Unlike many of the other titles in the series, The Dirt on Ninth Grave brought me to tears, twice. Ms. Jones handled two very emotional situations with grace and perfection. The scenes were shocking, yet utterly beautiful for the maelstrom of emotions they generated.

Another great thing about The Dirt on Ninth Grave is that there aren’t a dozen different plots, sprawling in different directions. Aside from Charley trying to discover who she is and what she can do, there are only a handful of side stories. My favorite is the mystery of what is happening to a shop owner, Mr. V, and his family. While she still doesn’t make the best decisions, I like that Charley has solid reasoning for why she does what she does. And again, it’s Charley at her best because she’s not hampered down by all the otherworldly concerns and the complexities of her life.

Honestly, I would have given this title an A if it weren’t for two things. First, Charley has a stalker, and I felt the storyline’s conclusion was way too convenient and the set-up to get there was contrived. Secondly, the last 10% or so of the book was a HUGE info dump. It was too much information, and it broke the flow of the story, which was perfect up until that point. I got confused, and after a while, I just didn’t care.

As for the narration by Lorelei King – perfection. Seriously. I love her work. And this time around, I didn’t confuse Charley with Mercy Thompson (another series narrated by Ms. King). Ms. King hits all the right notes, using the perfect voices to match each of the characters, even tossing in some accents. She uses different voices for each character, and it honestly sounds like a cast instead of one person. But bottom line is, she nails Charley. She brings out Charley’s snark and humor, her ADD and confusion, as well as her confidence and heart. It’s not all laughs, and Ms. King reaches all the highs and lows.

In the end, I truly enjoyed The Dirt on Ninth Grave. It is probably my favorite book in the series to date because it combines the humor and storylines of the first few books, with the emotion and connection I’ve only come to know after reading this series for so long. Just like Charley had to find her way back, so did the series. And I’m happy to report, the Charley Davidson series has found its mark again.

My Rating: A-
Narration: A+

10 responses to “Listen Up! #Audiobook Review: The Dirt on Ninth Grave by Darynda Jones”