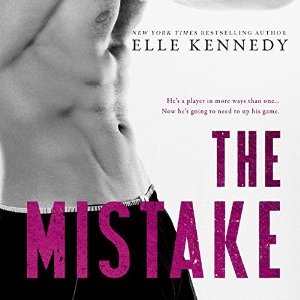 After devouring the first Off-Campus title, I couldn’t wait to start The Mistake. This time around, the story focuses on Briar College junior, John Logan, aka Logan. Watching is best friend Garrett fall in love with the perfect woman (The Deal) has been difficult for Logan because he wants Hannah for himself. He can’t shake his desire for his best friend’s girl and tries to forgot about her by non-stop drinking and hook-ups. But one night, in his efforts to escape Hannah and Garrett, Logan ends up mistakenly at freshman Grace Iver’s dorm door.

Grace is a successful freshman at Briar, but now that the school year is almost over, she realizes that she’s not really done much socially her first year at college. She’s still hanging out with her complete opposite high school BFF, letting Ramona dictate Grace’s social calendar. So when the hottest guy on campus, hockey stud John Logan, shows up at her door, Grace decides to throw caution to the wind and invite him inside.

The Mistake is another wonderful first love/forever love NA story from Ms. Kennedy. While Logan and Grace appear to be complete opposites, their individuality and uniqueness fit together like two puzzle pieces. They share scorching chemistry, even though Grace is a virgin and Logan is a player. And this is the start of their initial issues. When Logan realizes that he’s “using” Grace to “forget about Hannah,” he tries to do the right thing, which just blows up in his face. Cue summer vacation and months apart.

When school starts back up in the fall, Grace is a changed woman. She’s still the wonderful, quirky individual from the previous year, but she’s realized that she needs to branch out on her own and make new friends. However, Logan isn’t willing to give up on Grace, and let’s just say, the lengths he goes to get her to go on a date with him are laugh-out-loud funny. Logan is a bit confused at times, but he’s adorably sweet and genuine. It just takes him a while to figure things out. The story evolves slowly as the pair comes together without preconceived notions or past relationship baggage. I adored watching each push and pull, bringing out the best in the other.

Although these are college-aged students, both Grace and Logan are extremely mature individuals. Logan had to grow up quickly, helping his older brother care for their alcoholic father. Grace… I’m not so sure where her maturity comes from other than a great relationship with both parents. But it allows the couple to be open and honest, making them more relatable and the story more enjoyable. However, Grace’s sexual expertise may be a bit much for someone so young and well, a virgin. And this time around, there is a lot of sex… pretty hot and steamy too.

The narration by Lorelei Avalon is spot on. She nails both the male and female voices – combining the youth and mannerisms of a college student. She alters her voice for each character, making it easy to identify who is speaking. Additionally, I love that she uses Grace and Logan’s voices for the narration, since the story is told in first person, present tense, alternating POVs.

In the end, The Mistake is a feel-good, witty romance that took me through the range of emotions, but mostly made me smile and laugh. Ms. Kennedy has a knack for spot-on pop culture humor that had me rolling at times. While the ending was a bit too neat and perfect for “real life,” I didn’t mind because this story is all about feeling good and falling in love. I cannot wait to get to the next title, The Score.

My Rating: A- Enjoyed it a lot
Narration: A  Loved it

Non-Audiobook Reviews in the Series:

Audiobook Reviews in the Series:

The Deal by Elle Kennedy (Off-Campus #1)

4 responses to “Listen Up! #Audiobook Review: The Mistake by Elle Kennedy”