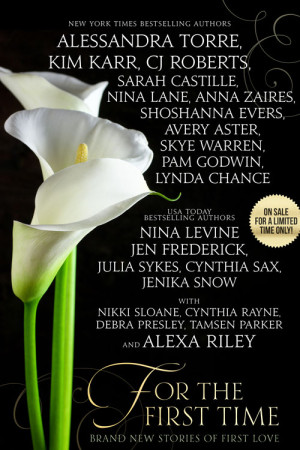 For the First Time Anthology

You never forget your first time…

A brand new anthology of original, never-before-read stories from today’s hottest authors, including:

From young heartbreak to a virginity auction, from the chance meeting to the happily ever after, twenty-one exclusive stories explore first love in all its forms.

From Looking for a Complication by Tamsin Parker:

When they’d finished their drinks, they took a meandering walk in the swank neighborhood. They walked so close their hands would brush and while they’d pull back and make awkward apologies, it always happened again. When they ducked into an alleyway to avoid a raucous group of undergrads, it didn’t seem strange that they stayed.

Nor did it seem odd when Astrid pushed a stray strand of Kinsey’s hair behind her ear and leaned in like she might kiss her. It only got weird when Astrid pulled away a split second before impact and shook her head, cursing under her breath. The other girl turned to head back to the street, but Kinsey grabbed her hand and tugged her further into the dark, narrow space between the buildings.

She didn’t let go because she wanted to make it clear to Astrid that her would-be advances weren’t unwelcome. Not at all. So she waited for Astrid to meet her eyes and then spoke, her words weighted with encouragement.

“I hope you realize I wouldn’t do anything I didn’t really want to do.”

“No,” Astrid said, her dark eyes somehow growing more intense than Kinsey had thought possible. “I don’t think you would.”

Kinsey’s back hit the brick wall behind her as Astrid put hands to her shoulders and pushed. The brick scratched at the back of her arms and her shoulder blades through her dress. It didn’t scare her but made her feel…alive. Excited.

And when Astrid asked if she could kiss her, Kinsey didn’t reply, but leaned forward to give her answer. Yes, please.

It was strange at first, to kiss someone her height. Kinsey was so used to kissing guys who were taller than she was, often by a lot. But kissing Astrid… Their mouths met without either of them having to crane their necks or crouch down, but with only a tip of their heads.

The scotch on Astrid’s breath was smoky; smooth and arresting all at once. As they kissed, Astrid pushed against her and Kinsey realized that though they stood eye-to-eye, chest-to-chest, there was something about Astrid that made her feel small and delicate, a sensation that had always thrilled her.

If it wasn’t that she towered over Kinsey, it must’ve been what Astrid was made of: thicker, firmer, weightier stuff. Kinsey fumbled, not sure where to put her hands. Which was dumb because she’d made out with a dozen people and she’d never had this problem before.

She made a frustrated noise she hoped Astrid wouldn’t take as protest. As Astrid’s hands slid from her shoulders and down her arms and then wove their fingers together, Kinsey sighed.

Astrid drew back and Kinsey squeaked in protest, chasing the other girl’s mouth with her own. But Astrid had a question instead of more knee-weakening kisses. “Okay?”