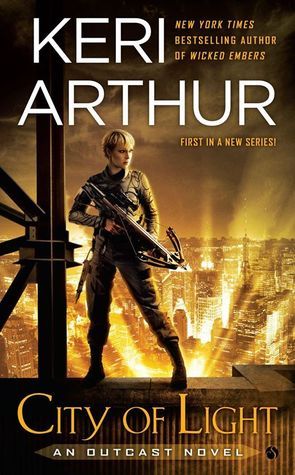 City of Light kicks of a new, futuristic fantasy series from Keri Arthur. In this unique world, there was a five-year race war between humans and shifters over a hundred years ago. The weapons used by the shifters ripped open portals to another dimension, allowing all sorts of dangerous “Others,” such as wraiths and vampires, into the world, making it extremely dangerous to live outside the walled cities of light.

The story is shared in first person POV of Tiger, the lone déchet who survived the devastating race war. Déchets were human-created beings with the combined DNA of humans, shifters, and vampires. She lives in an old, underground military bunker that manufactured déchets and was destroyed by shifters during the war. She lives an isolated life, out of necessity for she would be killed if discovered, with only the ghosts of the deceased déchets for companionship. But when Tiger helps rescue a young shifter named Penny from a vampire attack, she inadvertently becomes involved in a massive conspiracy that threatens the lives of children. Now she must decide who she can trust while trying to stop any more children from being taken.

Being the first book in a fantasy series, I expected a fair amount of world-building. Luckily, the author effectively uses narration and intense action scenes to help shape her new world quickly. She clearly defined what was good and bad and who the key players were. However, after I hit the 40% mark of the book, I felt that the world-building began to dominate the tale, without the development of a clear and engaging story. I found the unique world fascinating, but in the end, I was underwhelmed and confused by the overall plot.

As the main character, Tiger held her own throughout the story. She’s caring and kind, while equally fierce and strong. She protects those she claims as hers, which include the ghosts and children. I loved learning all of her different abilities and how she applied them to figure out what was going on. While I enjoyed Tiger and her fresh and almost juvenile view of the world, I didn’t connect with her sexuality. Programmed to be a spy, she used seduction as her means of infiltration. So when she found a lost lover and they engaged in extra curricular activities, I was actually turned off my her ability to have sex without any lust or love, especially since her emotions were more focused on potential betrayal than romance.

A strong and relatable main character is needed for a successful story. However, equally important are those characters that support the protagonist. Unfortunately in the case of City of Light the supporting cast is lacking. The fact the Tiger truly is alone and  humans and shifters don’t like her nor trust her is not the way to get me to like any of the characters. They used her, and frankly, I didn’t enjoy the constant cruelness I found in the supporting cast. I needed more from at least one of the characters… but I got nothing.

Overall, the world created in City of Light is extremely interesting, but the entire book felt like a set up for the second book, which is hopefully when we’ll see positive progression. While there was closure for a couple of items by the end of the book, the primary story is still very much unfinished. That coupled with the lack of progress made towards acceptance of déchets, left me feeling a bit unsettled by and unsatisfied with the book by its conclusion. With that said, I will certainly read the next book in hopes that the progress I hoped for will show itself.

When the bombs that stopped the species war tore holes in the veil between this world and the next, they allowed entry to the Others—demons, wraiths, and death spirits who turned the shadows into their hunting grounds. Now, a hundred years later, humans and shifters alike live in artificially lit cities designed to keep the darkness at bay….

As a déchet—a breed of humanoid super-soldiers almost eradicated by the war—Tiger has spent her life in hiding. But when she risks her life to save a little girl on the outskirts of Central City, she discovers that the child is one of many abducted in broad daylight by a wraith-like being—an impossibility with dangerous implications for everyone on earth.

Because if the light is no longer enough to protect them, nowhere is safe…

9 responses to “Review: City of Light by Keri Arthur”