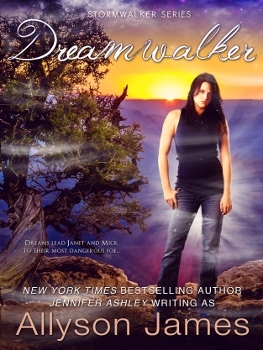 After waiting for over three years, I’m so excited to report that Janet and Mick are back! The fifth Stormwalker book opens with Janet and Mick on a date. Their fortune cookies contain dire messages that Janet must go help her half-sister (same evil goddess mother), Gabrielle. From there, things only get more chaotic and dangerous as Emmett Smith, the evil mage from the previous book, is back. As the Ununculous – the most powerful mage in existence – he kills anyone who would be his competition, and he desperately wants Janet and Mick’s magic mirror.

Dreamwalker is a wonderful addition to one of my favorite series. Although it’s been a while since the previous book, I was able to submerse myself completely into the world without feeling like I forgot anything. Ms. James does a great job tying in important facts without it feeling like a rehash of the entire series.

One of the best things about the Stormwalker series is the ensemble cast of characters who surround the protagonist, Janet. From the love of her life, dragon shifter Mick, to her powerful sister. From her wiccan hotel manager to the vampire resident. From her watchful grandmother to her loving father. From the contrary, mysterious Coyote god to the magically null police officer. The list goes on and on. Each character adds so much to the setting of the story and helps create a home for Janet, as well as the reader. Each person has his/her place in the overall tale; no superfluous fillers. Through flashbacks and present day actions, we learn more about several of the cast, as they in turn learn more about themselves.

This time around, Janet spends quite a bit of time in her own past as she dreamwalks, which is different from dreaming. In her dreams, she relives parts of her life, while maintaining knowledge of her current self. At first, I enjoyed the trip down memory lane, to a time before the series began. But after a while, the dreams began to feel like filler to me, and I would have preferred more time in the present.

Overall, Dreamwalker is an enjoyable story. I love this series and have missed it greatly. While the book was entertaining, it was lacking the “big mystery to solve” that has accompanied the previous titles. Dreamwalker felt almost like a transitional tale, yet still complete. It closed some chapters in Janet’s life but opened new ones. The dreamwalking was an interesting tool, but I felt a bit cheated out of “new” material because of it. However, in the end, it simply felt so good and right just to be with the characters again.

All is quiet at Janet Begay’s Crossroads Hotel, where the paranormal is normal, until Emmett Smith, the most powerful mage in the world, arrives to announce his intent to steal Janet’s smart-mouthed magic mirror.

Janet already has her hands full trying to keep her sister Gabrielle under control as well as plan her upcoming wedding to her dragon-Shifter boyfriend Mick and taking care of the weird creatures that suddenly turn up at Barry’s biker bar.

When Janet is knocked out fighting the creatures, she wakes up seemingly in the past, when she and Mick had first met and traveled across country by motorcycle, alone and free. The dream seems so real that Janet begins to forget it isn’t.

The dreams call her back, each one more powerful than the last, until she can no longer distinguish between past and present—and she’s not the only one affected. Janet and her friends—Mick, Cassandra, Nash, Gabrielle, Coyote, and the dragon—must band together to thwart this greatest of magics before it splits them into fragments and leaves the world vulnerable to the most evil of evils.