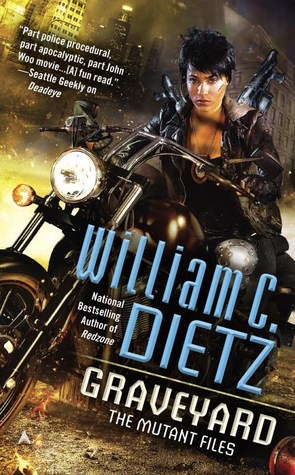 I’m a little sad to say that Graveyard is the final book in the Mutant Files trilogy.  The plight of Detective Lee stopping the Bonebreaker (before he captures her) reaches its climax and resolution along with a few other elements along the way.  I really enjoyed this final novel in the trilogy though I am going to be a bit sad to say goodbye to this world.

*****Please note this is the final book in a trilogy and therefore would be spoilerish.  I recommend starting with the first book, Deadeye so you can truly enjoy the overall series.******

At the conclusion of the previous novel, Redzone, I was beginning to think this series might continue, even through the beginning of Graveyard I thought it was a possibility.  However with the overall story arc of the Bonebreaker being resolved, the trilogy concludes nicely.  Though action is a strong element in this trilogy, this final novel was jammed packed.  Graveyard starts sedately enough only to have war break out and Detective Lee getting pulled in to help defend LA.  I really enjoyed how each seemly separate plot line overlapped with others to create a deeply fascinating detective thriller.  The war between the norms and mutants, the Bonebreaker, the political drama of the Mayor, and (of course) Lee’s personal life are all well-paced and balanced through the course of the story.  The way each was resolved was gripping and came to logical conclusions.  This novel truly was a brilliant capstone to the series.

As a sideline plot, I really enjoyed the personal growth of Lee.  Through this novel, we see the maturity she’s gained from the experiences we witnessed in the previous novels.  She is working smarter and harder, which pays off for her.  The self-discovery she had begun in the previous novel, Redzone, is completed in this novel.  I really enjoyed watching Lee realize happiness and strive to make it work.  The comradery between her and her fellow detectives and supervisors helped to illustrate how far she had come.  Though a loose cannon, she proves that she can be a maverick, but a valuable and dependable part of the team (when used effectively).

If you enjoy some science fiction with your detective drama, especially one in a post-apocalyptic world, you really should pick up The Mutant Files.  This action packed, fascinating world will keep you on the edge of your seat as you follow Detective “Deadeye” Lee as she hunts down a police serial killer along with her ‘typical’ police duties (and the trouble she seems to attract). Though Lee’s story is complete, I hope that maybe we might be able to experience more stories in this complicated and interesting world.

2069, Los Angeles. Decades after a bioterrorist attack decimated the population and left many of the survivors horribly mutated, the “norms” have forced mutants into dangerous areas known as red zones. And the tensions between the two groups are threatening to boil over…

LAPD detective Cassandra Lee is known for her single-mindedness, and right now, she’s got only one goal—track down the Bonebreaker, the man who murdered her father. But her quest for justice is derailed when LA comes under attack.

The Aztec Empire, a Central American group determined to take back the U.S. territories that their Spanish ancestors once controlled, has led a mutant army into California. Suddenly caught in the middle of a war, Lee must put all her energy into keeping her city safe while unearthing the political secrets of LA’s shady mayor. And with the Bonebreaker hunting her down, losing focus even for a second could mean death…