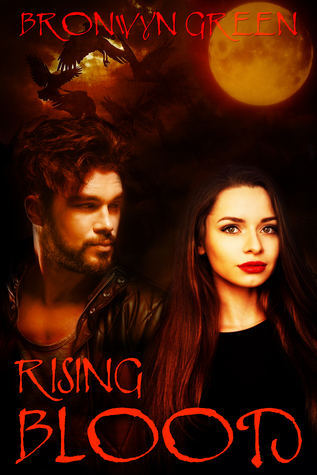 Harper Yovanoff and Elliot Zielin are vampire hunters and reluctant partners. Harper does not think highly of Elliot and is frustrated that she’s been stuck with him. Meanwhile, Elliot just wants to make sure Harper stays safe. And although Harper finds Elliot attractive, she knows that getting involved with co-workers can go badly. When Harper and Elliot discover that vampires are targeting and turning hunters, they must put their differences aside and work together to save their coworkers and friends.

Rising Blood is a short, standalone story that features some traditional, old-school vampires. I loved the Buffy the Vampire Slayer feel of the hunters and vamps, whose faces morphed from normal to their bumpy state when feeding. The book is shared from alternating POVs, giving a balanced look at the romance. Harper and Elliot share a strong attraction, and I enjoyed seeing how much Elliot cared for Harper well before Harper let herself feel more for him.

Overall, Rising Blood is a solid, traditional paranormal romance; sexy and action-packed. I like the characters, and the chemistry between Harper and Elliot is amazing. Unfortunately, the story suffers a bit from the shortened length, lacking somewhat on the emotional level, and I found that I didn’t connect to the characters as much as I wanted to. While not the most original tale, I still enjoyed reading Rising Blood.

Vampire hunter, Harper Yovanoff, is not happy. Ever since her former partner vanished, she’d been content to work alone. Unfortunately, her boss doesn’t feel the same way. Harper’s been assigned a new partner—a new partner who’s an utter pain in her ass. Elliot Zielin is panty-meltingly gorgeous, but he’s also reckless, not to mention, insufferably arrogant. If he’s not careful, the vampires will be the least of his worries.

Elliot knows he should play nice with his new partner, but he can’t resist poking the bear—the tiny, angry bear who’s so freaking beautiful, she makes him ache for things he shouldn’t want. Despite the fact that Harper has a stake with his name on it, he keeps pushing.

When a powerful vampire begins actively stalking and turning hunters, Harper and Elliot are forced to work more closely together than ever in an effort to save their own. With tempers and adrenaline high, letting off a little steam goes way too far, and they both end up in a place they never expected. The threat against them increases and fighting their growing feelings for one another becomes impossible. But if they can’t stop the sire hell-bent on their destruction, all the love in the world won’t save them from becoming the very thing they hunt.