Recently, I finally got around to reading The Kinky Bank Robbers series by Annika Martin (aka Carolyn Crane). The series is a silly, sexy romp, full of fun and adventure, yet serious and poignant when called for. The books follow a group of bank robbers, known as The God Pack, who live life by their own rules, making the most of each moment, while supporting one another with unconditional friendship. Each novella-length book is its own standalone tale, but the stories are richer as they build upon the connections made from book to book. All three books are shared from the first person point of view of Isis. 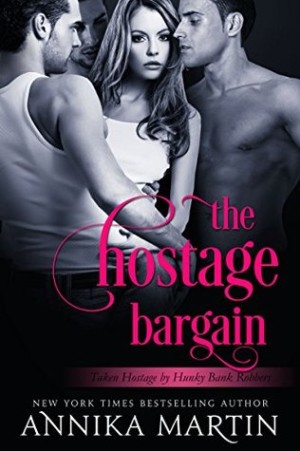 It’s just another day at her horrible job at First City National until three bank robbers dressed in business suits and zombie masks walk into Melinda Prescott’s bank. She immediately feels a connection to the group, volunteering herself as a hostage, wanting to help them stick it to her boss – the man she blames for her parents’ death. Now that she’s going along with the group, she wants to fit in, all the way, even adopting a goddess name, Isis, and agrees to all of the group’s sexually deviant rules.

This story works because it is over the top: fun and silly, yet intense. The author does a great job building Isis’s personality as a risk taker, so when she agrees to the bank robbers’ terms, it’s not out of the blue. Additionally, the fast pace allows for an honesty between the characters that would have otherwise been drawn out secrets or misunderstandings in a more traditional romance.

The Kinky Bank Robbers series is aptly named: the group loves sex, naughty, gritty sex that typically involves more than two players. And while there are a number of graphic sex scenes in the short book, the scenes add to the tale – whether it is about pushing individual limits or healing old wounds, it all fits together seamlessly. 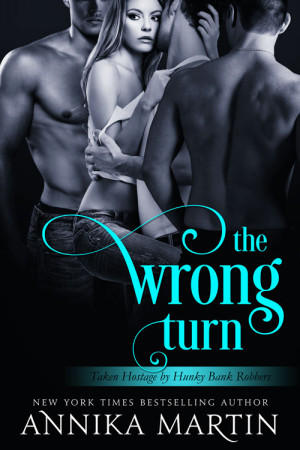 Now that the God Pack is a complete foursome with matching tattoos and Isis formally part of the club, the group needs a score to keep up with their fast-paced lifestyle. But Isis notices a dark edge to Thor, who is becoming increasingly reckless and pushing the others. She’s worried he may self-destruct and bring down their happy group.

The fun carries on in the second Kinky Bank Robbers book, as the group continues to evolve and grow. They recognize that they are a couple now, even insisting on a romance date and a “couples massage.” Their actions are wicked and humor spot on, yet this time around I felt almost on edge with Thor’s behavior. The author does an amazing job of storytelling through Isis’s eyes, and isolating the needs of the group into small, bite size issues. First it was Zeus (book 1) and now it’s Thor. The story of the heist unfolds around Thor, and we witness the group realize his needs.

While I completely enjoyed the adventure and sexiness of the second story, I felt that it wasn’t as complete of a tale as the first book, or rather that it was more like a slice of life. We saw a heist and the group grow closer, yet I wanted more from my hunky guys and girl. Yet The Wrong Turn was utterly fun and crazy, with just a bit of sadness and edge because of Thor and his recklessness. 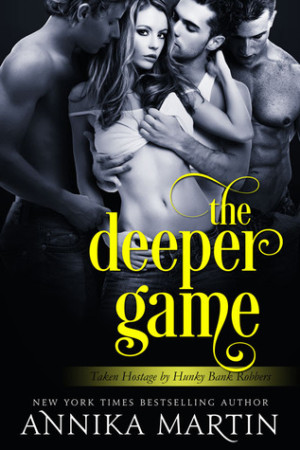 The third book in the Kinky Bank Robbers series opens a few months down the road, and the group is solid. They decide they want to make a statement and really “stick it to” those who forced the guys underground in the first place, so they start planning a heist at Los Angles’ Prime Royale bank. The Big One. However, Isis wants the God Pack to consider retiring to a small island because she doesn’t want to lose her kinky bank robbers now that she realizes she loves them. And to complicate matters, someone is leaving Isis threatening messages in pig’s blood at the door of their secret hideout.

Once again, I was immediately engrossed in the story because of the characters and the fast-paced, quickly developing storyline. The Deeper Game is definitely my favorite book so far. One of the best parts about this story, which is different from the previous two books, is that there is a mystery to be solved: who is threatening Isis? I love that the guys are right on top of it and able to use their mad skills for good, rather than vengeance. It reminds us that these men were spies (and a doctor) before bank robbers. Going through the clues as they simultaneously plan the heist upped the intensity and excitement.

Additionally, there is tremendous relationship development over the course of The Deeper Game. The group comes to terms with both individual and mutual feelings, sometimes pulling them out painfully and always with sexual tension. There were even some heartbreaking moments. There are power shifts and lots of kinky, pushing-the-limits sex involved, as well. And again, the open honesty that comes from the need to keep things moving along helps the story stand out. It’s so well written and a refreshing change from the norm.

My Rating: A, Loved it

The Hostage Bargain (January 12, 2014)
When small town girl Melinda Prescott is taken hostage by three hot bank robbers, she quickly discovers that a life of bank heists, luxury hotels, and kinky menages is way more exciting than working on the family farm. She should be scared of her dominating, fierce captors…but there’s something wicked inside her that’s craving to obey their every dark desire.

Melinda eagerly throws in with her three smoldering fugitives…and soon realizes that these are no ordinary bank robbers—and that bad guys aren’t always who they seem. But will her delicious captors overcome their own demons enough to let her in? And can these underdogs fight an evil conspiracy that’s larger than all of them?

The Wrong Turn (January 12, 2014)
When Isis consented to letting three hot, dominating bank robbers use her for their every delicious whim and pleasure, she was thinking about forbidden thrills. Dangerous fun. What she never expected was the deep bond the four of them might form.

But when the group plans a daring heist during a night of kinky sex, she discovers how strong their emotions can grow—and how high the stakes can climb. Do the outlaws have what it takes to evade their enemies…and give each other what they truly need?

The Deeper Game (June 29, 2014)
Q: Who would stalk Isis?
A: Somebody with a deathwish.
Isis always knew her bank robbers were ruthless, dangerous, and brilliant. After all, they take their names from gods. They’ve eluded law enforcement agencies across the globe. And with just the crook of a little finger they’re able to bend her to their every kinky desire.

But it isn’t until the threatening letter arrives for her that she realizes just how ruthless, dangerous and brilliant her three men are.

The stalker’s threats unleash the robbers’ most primal and possessive instincts as they blaze a path of destruction through the criminal underground. The culprit lands in a prison hospital before the outlaws can get their hands on him, but at least Isis is safe. Or is she? Can the robbers let go of their obsession with banks long enough to recognize the danger swirling around her?