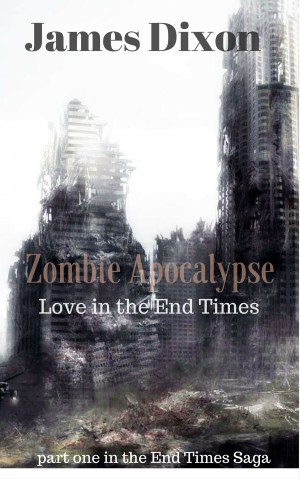 Four shapes slide through the night. They are ghosts from another time, they hint at a civilization lost beneath the currents of latter days. They are hurried, they don’t know the luxury of leisure. Such luxuries are lost. They too were washed away by the currents, the ever changing currents.

They are led by a man. A leader such as dark times birth. He is Michael; this is his name, it is his being. It is all he has left of the bright days. He leads them through the city streets. Streets which were loud and messy once upon a time. Now they are quiet, the wind howls through the moonlight, the broken windows stand dull, empty. They cross a square, they turn right. The stars above shine oblivious. They don’t know the disasters of late, they are too large in this life to know of such small tragedies.

Each of the shapes walks with exaggerated caution. This is the gait of the end times, these are the footsteps of man. Footsteps whose tread has grown used to picking their way through civilization’s remains, silent as the night, under cover of the darkness which is their ally and their worst enemy. The debris of yesterday absorbs them, it holds them close. Michael leads them and they are the shadows of their shadows.

They are black bundles, Michael has made sure of this. He insists on it. He knows it is futile. The beasts don’t use their eyes with anything near the reliance of their other senses. ‘They will smell us and hear us long before they see us, Michael,’ they all told him. ‘They can smell the life in our bones, they can hear the breath in our lungs.’ He didn’t listen, he doesn’t care. He is a careful man, this is why the darkness has made a leader of him.

He has made sure they are one with the darkness. They wear dark clothes. They died blankets with pitch, they ripped them up and wrapped themselves in the lengths, bandaged like mummies. Like the walking dead in children’s stories. Stories which used to be told in the night time to lull children into sleep. Children don’t sleep so soundly any more, they do not stay children for very long.

The rags hide more than just bodies, fresh, living bodies. They hide their tools, their weapons, their satchels of food such as will sustain only the living. They carry guns, automatics and side arms and sawn off shot guns, all appropriated from licensed gun shops after the outbreak. Their belts are laden with spare ammunition, cartridges for every purpose; around their bodies are slung even more, and hidden deep in their satchels spare cartridges for their handguns sit, ready loaded, waiting to be slid into place.

They have knives as well. Not the kind of kitchen knives with which their old selves were so familiar. They are all middle class, they were relatively affluent in the world that was, and they know the difference between a steak knife and a fish filleter, between a carving knife and a dicing knife. In the kitchens in which they used to prepare their food sat wooden blocks with a dozen knives sticking out of each. In their drawers were a hundred more, cutlery enough for every occasion. But such finesse is lost, such civilisation is lost. These days they have serrated hunting knives tucked into their boots, they have razor sharp skinning knives sheathed at their waists. This is their new vocabulary, this is the language they have had to learn.

And each shiny barrel, each glinting bullet in its belts, each freshly sharpened knife edge is a mirror on the world. It reflects the world, shiny metal surfaces capture the world and hold it up for inspection. ‘They will sparkle in the night, they will clatter together, they will reveal us,’ Michael told them, and bid them wrap these up in black rags. They are softened in their hideaways, tucked firmly against the only warm bodies this side of the city. This is why Michael is their leader; this is why they are still alive.

Mo whispers to Juno. He says ‘look, there, there’s the modern art gallery. Oh, the things I could show you in there, back in the world that was.’ She smiles at him, her smile is one of warmth. It is the only warm thing, it leaches the cold from the surrounding night. But before she can reply Michael shushes them both. He is in front of them, he can see the road ahead.

He knows their feelings for one another. But it is of no moment. This is not a world for such softness. Such softness is naught but a chink in one’s armour, and one chink is enough to let the night in. In the camp, in the forest, surrounded by the armed living and protected by sentries at the fences, love is permitted. But only permitted, never encouraged. ‘Attachment will break your heart in a world in which life is so cheap,’ the elders say. He says the same, he allows no attachment.

But Mo and Juno cannot help it. They share a tent. They pretend they don’t, everyone pretends they don’t, but they do. And every so often an elder might be caught looking into the distance above their tent, remembering the world that was, remembering the attachments they had once celebrated.

This was once a city of attachment. Millions of people had lived here. Poverty was here, luxury was here. From the downtown tenement slums to the park side mansions people had lived and breathed as one. Those stars far above, shining down on them, would have noticed one organism, sprawled and messy and breathing hard, an asthmatic die hard clinging to this little rock on the outskirts of a forgotten galaxy, relentless and unending. They would see them still, the delay in light’s travel showing them images of the world that was, denying them the news that the world has since ended.