Today we welcome Camilla Isley who is celebrating the release of her latest title, A Sudden Crush.

One day I was visiting the Chicago Zoo (if you ever find yourself in Chicago and are in the mood for a walk, you should visit the zoo at Lincoln Park, it’s free!)

However, as I was passing through the monkey compound I spent a lot of time watching this or that baby scurry around, how adorable they were, how human, the way they wrapped themselves around their moms’ belly in the cutest way possible. My husband literally had to tear me away from the exhibition, left to my own designs, I would have probably spent the entire day there. Anyway, the image of the cute little baby monkeys stuck with me, I always like to have a furry cutsie in my novels, and so I was thinking… I already did the kitty, so the next obvious choice would be a puppy, but how cool would it be to have a baby monkey? This is how the conversation between me and myself went off in my head:

Me. “Yeah, it would be very cool, but perhaps not very realistic.”

Myself. “Um, you’re right I don’t think you’re even allowed to have a pet monkey.”

Me. “Nope; and we wouldn’t want our protagonist to be a smuggler of exotic wildlife, now, would we?”

Myself. “Eh, no. You’re probably right. It’s a pity, I liked the idea of adopting a baby macaque. Are you sure there’s no way to get one as a pet?”

Me. “Not unless you went to live in the jungle for some reason, no, I don’t think so.”

Myself. “Live in the jungle you say, uh?”

And that’s when the light bulb appeared above my head. Just like that, my brain started whizzing with excitement and I decided I would shipwreck my lead character, Joanna Price, and have her crash on a deserted island. I also instantly decided on the title of the book. Playing with the similar spelling between “crash” and “crush”.

The gruff, handsome stranger, Connor Duffield, who would inexorably land on the island with Joanna was almost a given, as I’m a sucker for love/hate relationships. To add some complications, I decided to have Joanna find herself in this scenario on the day of her wedding—no less, just after she leaves the reception to go on her honeymoon with her gorgeous new husband, Liam. Eeeeee, what a disaster.

It was interesting to put Jo through so many challenges in this book and to see her grow and thrive. I had a lot of fun writing A Sudden Crush and I’ve tried to put in it as much humor as romance. I hope readers will enjoy the ride and have as much fun with it as I did. 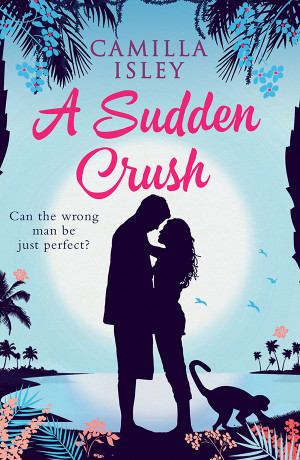 Joanna Price is a city girl with the perfect life. She loves her job as a book editor, she just married Liam, high profile bestselling author and the man of her dreams, and she’s headed to the Caribbean to enjoy two weeks of paradise for her luxurious honeymoon.

Connor Duffield is a gruff, grumpy rancher from the Midwest. He is a country boy who has a no-nonsense approach to life, more scars than he’d like to admit, and he hates city girls.

So it’s just a misfortune they have to sit next to each other for a six hour plane ride. Even more so when their flight is caught in the perfect storm and Joanna wakes up stranded on a desert island with Connor, the very man she hoped she would never have to see again.

Why are they alone on this forsaken island? What happened to Joanna’s husband?

When her dream honeymoon turns into a hilarious tropical nightmare, Joanna’s first thought is survival. However, she and Connor will quickly discover just how boring paradise can be. As the days turn to weeks, and then months, this mismatched pair will have to learn how to coexist and how to resist the sparkles of an attraction they weren’t prepared to feel.

When they are finally rescued will Joanna’s marriage be saved as well, or will the life she knew and loved be in ruins?