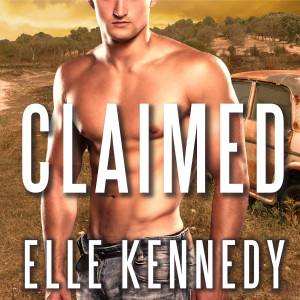 Forty years ago, the world went to war with itself, releasing bombs and destroying much of the planet. After the chaos, The Global Council took charge, creating mandatory communes, making everyone equal. Those who live outside the cities are outlaws, and are either assimilated or killed. Connor and his men are an outlaws, living day-to-day, enjoying what they can when they can. But Connor wants to find and destroy the head Global Council enforcer, Dominick, the man responsible for killing his family.

Hudson escaped the city and Dominick to become an outlaw. When a group of bandits attack, she convinces Connor to give her protection. Although he says it will only be for one night, Hudson will do anything to convince him to let her stay longer. And using her sexuality to get into his bed is just one way she’ll convince Connor.

I have very mixed feelings about Claimed. The futuristic world and concepts were interesting and engaging. I found that by the end, I wanted to know how the world will deal with the obvious problems within the World Council. But… I didn’t care much at all for the characters and their stories until the last quarter of the book.

After listening through the end of Chapter 8 (49%), I had to stop the book, and I almost DNF’d it. The combination of the narrator’s soft-spoken, laid back voice for Connor and his asinine dialogue got to me. Connor is a strong, dominant man, and the voice selected just didn’t fit. Also, the entire plot for the first half revolved around constantly thinking about, having, or complaining that they aren’t having sex, and it was beyond annoying. I mean… they were on an important and dangerous mission, and Connor starts messing around with Hudson. It was ridiculous. Yet about Chapter 15 or so, the sex wasn’t as frequent, allowing the story to pick up and finally move forward. At this point, I actually began to care what was going on.

The narration is a huge part of the problem I had with the story. I started listening to the book at 1x speed, but after the halfway point, I picked up the pace and listened at 1.25x speed. It didn’t help much. C S E Cooney’s narrator voice was pleasant and had a good rhythm and cadence. But her character’s voices were annoying. As I mentioned, Con’s voice was way too laid-back and soft, while Rylan’s southern twang sounded fake. Other male characters sounded like teenagers. Her performance of female characters sounded more natural, but I wanted more emotion from them.

In the end, Claimed has some good and some not-so-good. The last couple of chapters were enjoyable and engrossing, but I’m not sure if it was enough to get me to read the next book. And since I was not a big fan of the narrator, I don’t think I’ll listen to the book, should I choose to read it.

Story:  C  Finished It — Liked some, didn’t like some
Narrator:  D  Not A Big Fan

Non-Audiobook Reviews in the Series:
Vampbard’s Review of Claimed by Elle Kennedy

4 responses to “Listen Up! #Audiobook Review: Claimed by Elle Kennedy”