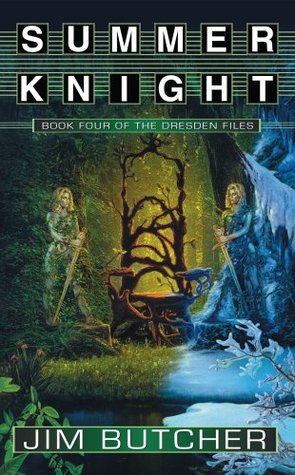 After taking some time off from the Dresden Files, I found myself happily re-engaged in the life of Harry Dresden, professional wizard and all around nice guy. Summer Knight starts about eight to nine months after the conclusion of the previous title, when Harry is forced to deal with the outfall from his actions against the Red Court of Vampires. His own kind, the White Council of Wizards, wants to hand him over the vampires to end the war and stop the violence between their kinds. Luckily, Harry has a few friends on the White Council who help him get himself cleaned up and functioning again (he’s pretty depressed over the loss of his girlfriend, Susan). Unfortunately, Harry must stop an impending war between he Summer and Winter Faery courts in order to save himself and the world.

I found myself much more engrossed while listening to Summer Knight than the previous couple of titles. The story reaches a balance between dark and light; something that’s been missing for a while. Harry’s life is not an easy one, but he’s finally realizing has and is turning to friends. He starts the book in a bad place, but by the end, he has transformed himself into a happier person who is better equipped to deal with the pitfalls tossed in front of his every turn. I was pleased that the author didn’t lead Harry into a dark place and leave him there, but instead gave him insight and allowed him to grow without changing his core persona.

There is a lot that occurs during the Summer Knight. Several new characters are introduced over the course of Harry’s investigation into the murder of the Summer Knight. Yet through it all, we welcome back key characters from the first three titles. His conversations with Police Detective Karen Murphy were among my favorites of the book, and I was glad to see the pair trusting one another again. The mythology of the Fae expanded tremendously, but it never felt overwhelming or confusing. My biggest complaint is that once again, fight scenes seemed to go on forever and overwhelmed the story.

As with the previous titles, James Marsters provides an excellent performance which made listening to the book utterly enjoyable. I liked that he added in some fabulous new faery voices, as well as some general effects, like yelling from a distance. His range continues to develop and grow with each book in the series.

In the end, I found Summer Knight extremely entertaining and an enjoyable tale. I especially loved the ending, and I was pleased that the author inserted more balance into the story than had been in the previous titles: balance between good and bad happening to Dresden; balance between the supernatural aspects and the mystery of the plot; balance between light and dark; and sadness and hope. The story rejuvenated my love for the series, which had waned after the previous title, and I look forward to seeing what happens to Harry Dresden next.